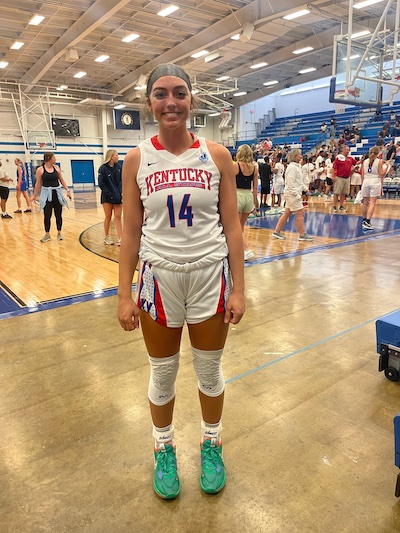 In the first game at Eastern High school in Louisville Feltner was named a starter for the Juniors against the Seniors and scored 10 points on 3 of 7 shots from the field and went 4 of 6 from the free throw line and 3 rebounds in a 106-83 victory.

In the second game at Bedford North Lawrence High school in Bedford Indiana versus the Indiana Junior All-Stars in a 92-89 loss Feltner started once again and had 12 points on 3 of 8 shots from the field and 6 of 7 from the free throw line and pulled down 4 rebounds.

“… It was pretty hard transition from softball but I had about a week to get my legs under me. I thought I adjusted well, I had been staying in the gym frequently all spring working when I could,  while still performing my best in softball.”

“… It was a great environment and it was an honor to be a part of our team. We have a very talented class, as does the seniors. it always feels good to win!”

“… We were down 23 points going into the 4th quarter and we cut it to 1 point on my two free throws with 20 seconds left but then we had to foul and they hit both of the free throws and we couldn’t convert for the 3 point play in the end, but it was a great effort and I’m very proud that we didn’t quit.”

“… Losing in the region final to Pikeville just adds fuel to the fire. We want to get to Rupp Arena more than anything else, we’ve already had a great summer so far and looking better than we did at this time last year. I’m so excited to start back in the fall.”

“… I want to make a college decision before this fall. I want to be able to enjoy my senior year without having to worry about making such a tough decision. I have so many great opportunities it’s going to be very hard decision.”