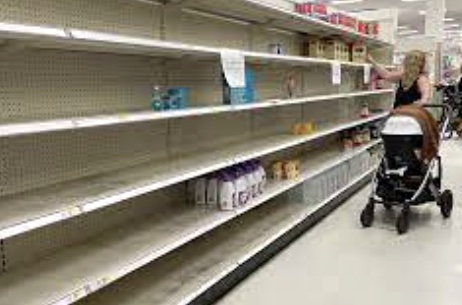 In February, Abbott Nutrition, an infant formula manufacturer, issued a recall of some of its powdered formula products following reports that four infants were hospitalized and two died due to a bacterial infection, according to the U.S. Food and Drug Administration.

This recall has led to a dangerous nationwide infant formula shortage. Kentucky lawmakers are monitoring the shortage closely as supplies continue to dwindle across the Commonwealth.

Committee co-chair Rep. Kimberly Poore Moser, R-Taylor Mill, said she has reached out to the Kentucky Attorney General’s Office about price gouging concerns. She also contacted the state Agriculture Commissioner, who has offered to call for donations through his Kentucky Hunger Initiative, she said.

“I would encourage you, the Cabinet (for Health and Family Services), to work with the AG department to see maybe how we can filter some of those donations out to our families,” Moser said.

On the retail front, Shannon Stiglitz, senior vice president for government affairs for the Kentucky Retail Federation, said retailers have worked to minimize theft and panic buying by securing infant formula on the shelves and placing limits on how much powdered formula can be purchased at one time.

The federal government is working to fix the supply chain issue by shipping in formula from other countries, but getting those products on the shelves is going to take some time as the products are inspected.

On the state level, Eric Friedlander, secretary for the Kentucky Cabinet for Health and Family Services, said the state is looking at taking back formula and redistributing.

Friedlander said he encourages families to check out online resources to locate formula such as the U.S. Department of Health and Human Services website at hhs.gov/formula. Doctors’ offices may also have infant formula samples to give to families.
For families who qualify for the Special Supplemental Nutrition Program for Women, Infants and Children (WIC), the infant formula shortage has been particularly difficult due to the program’s strict guidelines, one presenter reported.

Sara Jo Best, public health director for Lincoln Trail District Health Department, said there are nearly 108,000 WIC participants in Kentucky. Prior to the recall, Kentucky’s WIC participants could only purchase Abbott Nutrition formula due to a contract the state has with the company. Struggles in supply however, were being seen as early as November, she added.

“The Kentucky Department for Public Health began to create temporary choices for larger powdered cans of formula and expanded formula packed choices to assist families affected by both the shortage and the recall,” Best said. “Flexibility within the program continued to expand as the problem worsened.”

In addition to expanding options, health departments across the Commonwealth also worked to alert all families to the recall and to warn them about the dangers of making formula at home, giving infants cow’s milk or other milk substitute products, and purchasing formula online.

Sen. Danny Carroll, R-Benton, said he has concerns about prescription formula supplies. Friedlander responded that the cabinet is working hard to try to meet the needs of those families.

“You can provide your child with the nutrition that it needs, probably the best nutrition that your baby can have, so I would encourage moms to think about that,” he said.

The next Interim Joint Committee on Health, Welfare and Family Services meeting is currently scheduled for 1 p.m. on July 20 in Frankfort.

For a the full interim calendar, visit http://legislature.ky.gov/Schedules-Calendars