ATTACKER CLAIMED SELF DEFENSE, BUT POLICE SAY EVIDENCE SHOWS THAT WAS NOT THE CASE; 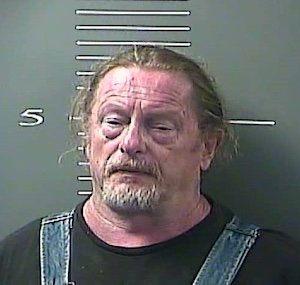 A Johnson County man remains in jail on a top felony charge, after he repeatedly stabbed a woman, sending her to the hospital in critical condition, while afterwards, claiming it was self-defense.

According to a report by the Johnson County Sheriff Office, they were called to a home on Route 1092 in the Flat Gap area, early Thursday morning, June 2, over a report of an assault in progress. When Johnson County Sheriff Doug Saylor & deputy Watson arrived at the residence, they both found the female victim entirely covered in blood from stab wounds in her chest and left arm.

Not long afterwards, Arthur Franklin Ray III, 59, of Flat Gap, KY. surrendered himself to law enforcement. Arthur Ray told the officers that he, the victim and another woman were drinking and having fun, when the victim suddenly “snapped” and began hitting him in the head, neck and arms.

However, Sheriff Saylor’s and deputy Watson’s report claimed that Arthur Ray’s statements did not match the evidence at the scene, as well as the statements by the victim and the second woman who witnessed the attack and who also called 911 for help.

Arthur Franklin Ray III was arrested by deputy Watson, and was charged with:

Arthur Franklin was transported to and booked & lodged in the Big Sandy Regional Detention Center in Paintsville. 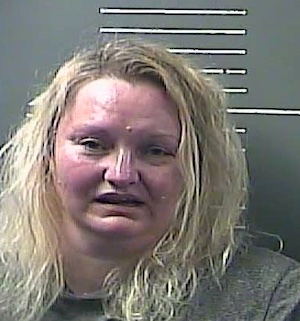 SHEILA L. WELLS, 49, PAINTSVILLE, KY., WAS ARRESTED AFTER STABBING HER MALE COUSIN ACROSS THE FRONT OF HIS NECK, IN AN UNPROVOKED ATTACK, DUE TO HER CLAIMING THAT HE WAS CONTINUOUSLY “ESTABLISHING DOMINANCE OVER HER.”

According to a press release report from the Paintsville Police Department, a Paintsville woman was arrested last month on a First-Degree Assault charge after attacking her cousin with a knife, cutting his throat.

Paintsville Patrol Department patrolman officer David Adams stated in his report he arrived on the scene on Main Street, on early Saturday night, May 21, after receiving a call from police dispatch reporting a male bleeding from a knife wound. According to the statement report, officer Adams came into contact with the victim, who had a large amount of blood running down his stomach, soaking into his shirt.

Officer Adams said in the arrest citation that Shelia L. Wells, 49, of 7th Street, in Paintsville, KY., reportedly used a large kitchen knife to assault her cousin as he was leaving her residence. According to the citation report, Sheila Wells told officer Adams her cousin did not physically threaten her but was “establishing dominance over her,” leading to the assault.

Officer Adams stated in the citation that Sheila Wells told him that she felt he was “establishing dominance” because “he’s a man and he thought he could just come to my apartment and stay and leave as he pleased.”

The victim had brought alcohol over to Sheila Wells’ residence in which they both shared, the citation said, and it was upon as he was leaving the apartment, that Wells assaulted the victim, cutting his throat around the front area of his right shoulder with a kitchen knife.

Sheila Wells’ preliminary hearing was set to be held on Wednesday, May 25.

Sheila Wells was transported to, booked, and is still remaining lodged in the Big Sandy Regional Detention Center.

No report on injured victim’s condition.