TWO BIG UNANSWERED QUESTIONS ABOUT THE MASSACRE, AND ONE WITH NO ANSWER, UVALDE WEEKLY SAYS 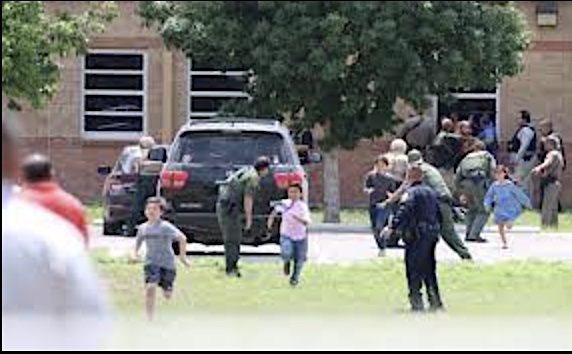 Publisher of Uvalde weekly explores two big unanswered questions about the massacre, and one with no answer

Two of the major unanswered questions about the massacre of 19 young students and two teachers in Uvalde, Texas, is how and why a door to Robb Elementary School was left open, allowing the killer in, and why police delayed confronting him. Craig Garnett, owner and publisher of the twice-weekly Uvalde Leader-News, answers the first and explores the second in his column in Sunday’s paper:

“Why Uvalde? We are not bad people. Even with the partisan rancor that has cleaved our nation, our residents have always been ready to help others without regard to politics. . . . Why wasn’t the west door locked at Robb Elementary? Because we are that community described above. We come and go to serve our children, not to do them harm. In the end an unguarded door, even though locked, buys what? The minute it takes for the shooter with a high-powered rifle to blow out the mechanism.”

As for the delay in confronting the shooter, Garnett writes that a regional police official “could not answer why it took an hour to end the attack” and quotes him; “It is a complex situation. They are measuring; they are measuring.”

“The question is how much measuring is permissible, while children are being murdered. Or perhaps they were already gone,” Garnett writes. “It pains to write these words of criticism about law enforcement, but parents and the community have the right to know. They must be told why police, whom parents at the scene begged to go in and save their children, failed to act. They have to know, to ever begin to heal.”

Garnett concludes, “There is a final question that no one will ever adequately answer. It came on Thursday in the form of a text message form our reporter, Kimberly Rubio, whose fourth-grader Lexi did not come home that day: ‘Why would someone hurt my baby, Craig?'”