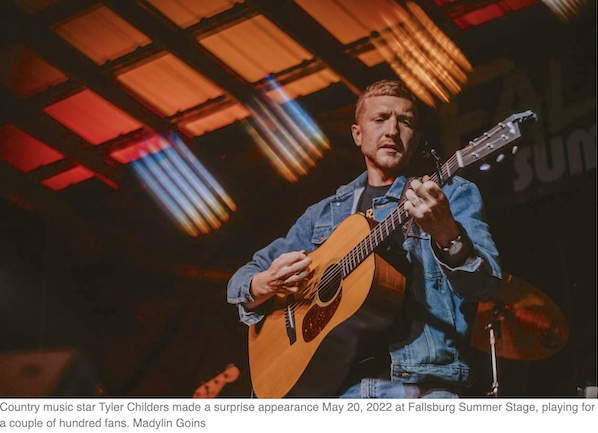 Paintsville born, Lawrence County raised country music star Tyler Childers made a surprise appearance Friday night to play at a small Eastern Kentucky music festival in the county he grew up in.

After Asheville, N.C. based bluegrass/roots group Town Mountain announced on social media Friday morning that they’d no longer be able to perform at the second annual Fallsburg Summer Stage in Louisa that night, Childers and his band The Food Stamps — Rod Elkins on drums, Jesse Wells on fiddle and guitars, James Barker on pedal steel guitar, Craig Burletic on bass and Chase Lewis on keys — stepped in at the last minute to fill the void. It was an intimate set form Childers and his band mates that lasted nearly two-hours for the couple of hundred bluegrass and folk music fans in attendance. The concert was a stark contrast to his recent Kentucky performance with a sold-out crowd of 16,000 at Rupp Arena with with Sturgill Simpson in February 2020.