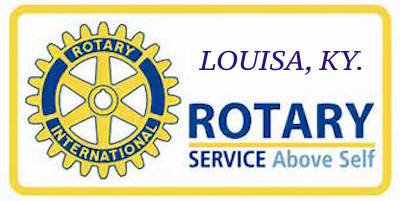 On Thursday May 26, 2022 the Louisa Rotary Club had there regularly scheduled meeting at First Baptist Church from 12-1PM. The President of Louisa Rotary Pat Hart opened the meeting with Prayer, The Pledge of Allegiance and The Four-Way Test, all members then sang an American Patriotic Song- “Our Country Tis of Thee.”

* Extension Agent Laura Opell Maggard mentioned that Sara Dill was the newest agent at the Louisa Office and is from Wolfe County, Kentucky. Maggard also said there will be an open house next Thursday June 2 from 11AM to 1PM where everyone can come meet the staff from the LC Cooperative Extension Office.

Maggard said the extension office will be hiring someone new to run the Farmers Market and other programs this year. June vouchers have changed this year the Seniors will be issued debit cards to use for purchases instead of paper vouchers.

She also said that the price of 4H camp has gone up and the horse clinic will be one day at the fairgrounds.

* Agent Citori Branham of the Lawrence Co. Extension Service said she is ready to start clinics.  “I will be starting the horse clinic for beginners and those who ride often and the youth can bring their horses. At the free clinic they will be riding horses and learning about horse shows,” she said. Branham is also a student at Murray State University where she is enrolled in the rodeo field.

Correction: The horse clinic is free. Camp is $70. Camp is originally $265 but the district board generously helps so it’s not such a burden on families.

The horse clinic will be one day only free and the camp is $70 a day and $265 total. The youth will learn to ride and groom the horses.

* Agent Maelyn Huff said,  “The Extension Office will also be looking to fill many spots from ages 9-14 yrs old at 4-H camp, Huff said she had girl spots open and has 7 boys so far, no girls. Huff has been with the extension office for 6 months.

After the special guests, Louisa Rotary President Pat Hart asked if there was any Rotary news.

“The Rotary Club of Pikeville will have a dinner on Saturday June 11, 2022 from 6-8PM. There will be Dinner and Dessert at the Appalachian Arena the cost will be $25 per person and 12 and under will be $12,” Hart said.

Louisa First Baptist Church Pastor Chuck Price spoke about his church’s recent  trip to Romania. Price said on the Moldavian side was welcoming. He said they took meds to churches and everyone was calm and he has long lasting friendship with the people.

Price said on the other side was Odessa where there were sand bags and guns everywhere and Odessa was very tense. “It really scared American visitors because they were closer to war on that side and had to be out of the village before dark,” he said. “It was a very neat experience and the Ukrainians think they have already won the war, he thought the people would be hiding in their homes but no, they were outside planting tomatoes and pouring concrete.

Check out Chuck Price on Facebook, he has pictures and stories. The war started February 24, 2022 and is still ongoing. Price said 2/3 of the children have been misplaced.

Louisa Mayor Harold Slone, who is in charge of getting the next speaker, said Rotary’s meeting on June 30th will be at noon @The Carter Room next to Garden Theatre (MOMO). It had to be changed because ‘The Junction’, where the meeting was to be held, had the date filled.

He also stated that the city pre-ordered plants this year for Memorial Day weekend and they need volunteers who want to help set out plants and flowers to show up around 9AM outside The Lawrence County Courthouse downtown Louisa, Kentucky.