The Resolution was presented by Trail Guys Andrew Goble, who works for Judge-Executive Phil Carter and the fiscal court and Scott Blevins, a KMRRA (Kentucky Mountain Regional Recreational Authority) employee Pictured below. 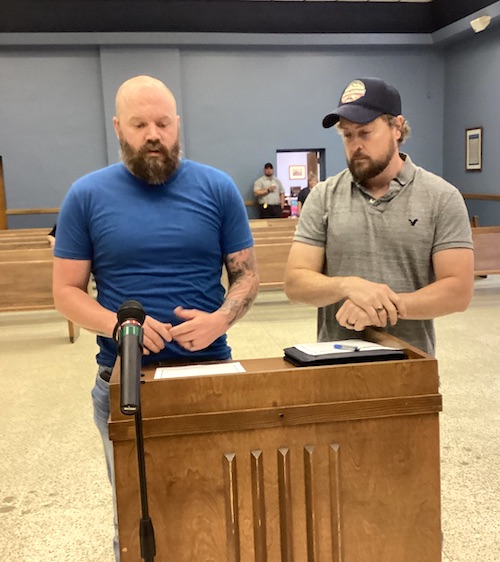 The discussion included bringing tourism and recreation into Lawrence County. LC Tourism Chairman Wes Kingsmore said, “The goal of Tourism Commission is to bring in more people and recreation, but we also want people to visit us and maybe stay and buy a house.”

LC Sheriff Chuck Jackson asked, “Who polices this, and what happens if there is a vehicle accident?”

“The Hatfield McCoy Trail in WV (which helped tourism in the state to swell to $22 million) is policed by the state Conservation department and all their rules apply. Any vehicle accidents on land owners property will be covered under the same KRS immunity law as the state, so ultimately the property owners will not be liable.

The court voted to accept the resolution which gives them the right to use county roads in their trail plan.

Motion for Resolution by Rick Blackburn and 2nd by Michael Mouse Halcomb.