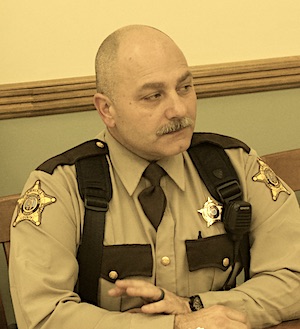 LOUISA,Ky. — Lawrence County’s Noah Thompson has brought excitement to the region, state and nation by making the TOP 3 in this season’s show, and a giant American Idol “Hometown Visit” is planned for tomorrow with an escort through downtown Louisa and a FREE concert at Luke Varney Stadium, which holds about 2,500.

WOW! We’ve never been through anything like this before in Louisa. Visitors are expected form all parts to see Thompson, the construction worker at ARC to worldwide fame in a matter of weeks. Just WOW!

Lawrence County Sheriff Chuck Jackson said this morning that he was on his way to a meeting with Louisa Chief Greg Fugitt and other law enforcement to plan the logistics of handling a crowd that could be in the thousands.

Jackson said if there is as many people as some are predicting, he thinks he can get more support from Post 14 of the KSP and maybe more.

“The ‘escort’  through Louisa has been put back to 7:00 and the polls close at 6:00 for the election so we are going to plan a way for late voters to get to the polls,” Jackson said. “If the crowd starts gathering earlier, we will stick to our route for the escort. We are also looking at the parking situation at the football field.”

Lawrence County Clerk Chris Jobe, who is responsible for county elections, did not come to work a clerk who answered the phone said. “He is not feeling well today,” she said.

Much of the election process is computerized the seven voting places set up for Tuesday will be able to send results digitally. But they have to bring the machine totals to the courthouse to be tallied officially after the polls close at six.

“It’s a wait and see situation,” Jackson said. “We’ll just have to handle what comes the best we can. But be prepared. Lawrence County people stick together during a time like this and we’ll get it done and I hope everybody has a good time seeing and hearing Noah,”