GROWING UP IN LOUISA: The old ‘KY Normal College’ 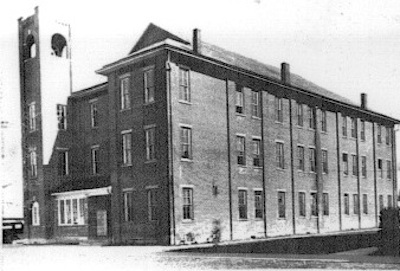 It stood, with its stately bell tower, at the southern end of Main Cross. While I had never heard that bell ring (Mr. Bill Cheek explained the structure was weak and the bell might have become loose from its yoke and fall through the floors below) but I do remember the electronic bell that was wrung by Mr. Bascomb Boyd to signal tardiness and classroom shifts. For many he was a favorite teacher, but to others he was seen as a fearsomely strict teacher of algebra and advanced mathematics. He is often remembered in gatherings of my classmates at reunions, proving his legacy in developing his students and leading them toward the road of success. His classroom was the first, just next to the staircase leading up to other floors of the old brick building. When that electronic bell rang one could be certain Mr. Boyd was in place, observing those few running to get to class on time.

During my days at the old LHS high school the room across the hall from Mr. Boyd’s room, was the small, but useful library. This was the spot that the big bronze bell would have settled had it fallen, but not before disaster took its gruesome toll. For those students that had to research subjects, or make a book report, the library was a necessity. Some students also had fallen in love with reading. Books gave us insight to the workings of the world, both from a business viewpoint, and also in discovering romance through the prose of Shakespearian authors. Our youth read magazines, attended picture shows, or when possible traveled, all of which broadened our growth and understanding.

We had taken classes in history and world government, as well as geography. For anything beyond those classes we’d have to do research. During those years it was a dream that Louisa would have its own public library, but it would be later when a building just slightly larger than a little shed would come to serve that purpose.

Mrs. Louise Kingsmore was our school librarian. I remember the help she gave me with the dewy decimal system and how to find cards that would disclose the location of certain books. She seemed always busy helping one person and perhaps two. She recommended books including adventure, travel, romance, and the classics. I worked with her when I was on the SCARLACK staff.

The library, even if small and hardly up to the standards that younger students would enjoy after the building was replaced, was a resource that helped with higher studies. Consider that many of our students had begun their training in small, often one room schools. When they joined us at the high school the number and variety of literature works was a major change.

Next to, and connected by a doorway, two large study halls were used for students who needed extra work or a quiet place to read and polish essays or term papers. I didn’t spend a lot of time there because we had a nice library at home. We not only had encyclopedias, but books collected by our family over the years. I recall reading medical books (grandfather was a MD), as well fiction such as Edgar Allen Poe. I read Wuthering Heights and many of the works of Mark Twain, and everything I could find relating to biographies of famous people. Landmark books taught me more about Bill Hitchcock, the Wright Brothers, Henry Ford, and the Alamo.

For those who were there, school was both a bit tough but always exciting and fun. I’ll try to remember the other teachers who had classes on the first floor. I know Frank Webster was one, but I suspect Kenneth Hayes and maybe Ruth Jackson were others? Maybe a reader or two will write me an email to remind me. If so, it would help my old brain, I’m sure.

Lawrence County Court Docket for the week of May 9-13