FLOYD CO. WOMAN IS ACCUSED OF SLASHING A MAN’S THROAT  FROM ‘EAR TO EAR’

INTOXICATED FEMALE SUSPECT DID NOT KNOW THE MALE VICTIM SHE ATTACKED, IN AN ACT STRAIGHT OUT OF THE ‘SCREAM’ HORROR MOVIES… 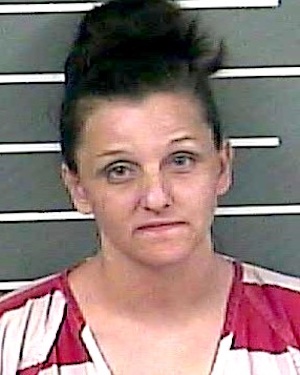 APRIL OSBORNE, 36, OF HIGH HAT, KENTUCKY, WHO WAS ARRESTED IN FLOYD COUNTY AFTER SHE ATTACKED A MAN WHO SHE DID NOT KNOW, COMING UP FROM BEHIND HIM, AND SLASHED THE MAN WITH A KNIFE ON HIS NECK FROM EAR TO EAR.

A Floyd County woman is currently in jail on  a severe felony assault charge, after she allegedly slashed a man’s throat from ear to ear.

According to the press release statement, the Kentucky State Police Pikeville Post 9 received a 911 call on an assault that happened around 9:30 P.M., Monday, May 9, on Cane Fork Road, off of Arkansas Creek, near the Martin community area in Floyd County.

Once KSP troopers responded to the home residence on Cane Fork Road and discovered one man had a severe laceration to his neck.

The initial investigation indicated that a woman, identified in the report as April Osborne, 36, of Hi Hat, KY., who stands accused of walking up behind the man, who she didn’t know, while he was bent down working on a motorcycle and attacking him with a knife.

The report stated that the investigation indicated April Osborne arrived at the residence where the victim, who was identified as William Guess, who was working on a motorcycle and began assaulting William Guess, which ended up leading to Mr. Guess suffering a severe laceration to around his neck, that circumference from his one ear to the other ear.

April Osborne then allegedly walked out into the roadway and passed out, leading to emergency calls from several people who mistakenly thought she might be dead when they discovered her in the roadway.

According to the police report, April Osborne initially denied responsibility, but after being shown a knife sheath that was found in her pocket, April Osborne allegedly said to the KSP troopers she cut William Guess because she thought he was attacking a police officer. April Osborne also told police she gave the knife to someone else to hold.

As a result of the KSP investigation, April Osborne was arrested and was charged with:

*ASSAULT, 1ST DEGREE; for which she now faces between 10 to 20 years in prison for the first-degree assault charge, if she is convicted. April Osborne is also charged with

*TAMPERING WITH PHYSICAL EVIDENCE, and

April Osborne was transported to and lodged in the Floyd County Detention Center in Prestonsburg, KY., where she currently remains incarcerated.

The victim, William Guess, was taken to Our Lady of the Way-Appalachian Regional Hospital in Prestonsburg, KY. for treatment. There was no word on his condition, but the police report indicates William Guess was able to talk to officers and positively identified April Osborne as his attacker, from a photo of her taken by the state police that was shown to him.

KSP trooper Derek Coleman is leading this criminal case investigation, and he was also assisted on the crime scene by KSP Post 9 Pikeville personnel.