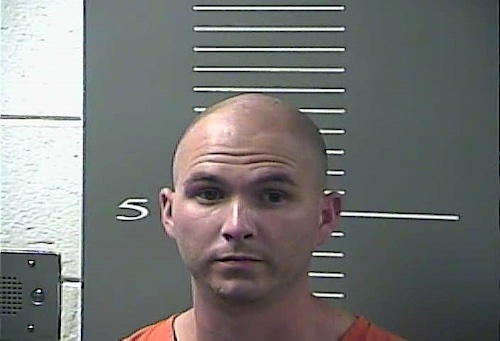 NO CHICKEN NUGGETS FOR YOU! JORDAN T, BEGLEY, 29, OF LOUISA, KY,, WAS ARRESTED ON LATE SATURDAY NIGHT, MAY 7, AFTER A BRIEF BUT DANGEROUS VEHICLE & FOOT CHASE IN NEAR AND AROUND LOUISA CITY LIMITS.

What started out as a emergency call of an incapacitated person in a running vehicle in the parking lot of a local fast-food restaurant, ended up instead with a Louisa man who was arrested on several charges, including felony endangerment after he allegedly led police on a chase through business parking lots before leading them on a chase on nearby roadways where his vehicle hit a ditch and became disabled.

According to the arrest citation report written by patrolman officer Jeffrey Chase Kirk of the Louisa Police Department, just before 12:00 A.M., on Saturday, May 7, officer Kirk was dispatched to the parking lot of the Wendy’s restaurant on KY. 3 in Louisa, to a report of a man passed out in a vehicle in the parking lot.

Officer Kirk wrote that he found the driver, identified as Jordan T. Begley, 29, of Timberlake Drive, in Louisa, passed out, and thereupon, he was able to wake him up, at which time Jordan Begley, who appeared intoxicated, started screaming at officer Kirk.

Officer Kirk wrote that he observed an open can of beer in the vehicle, along with multiple boxes of beer.

Jordan Begley, the arrest citation continued, then refused to get out of his vehicle and when Lawrence County Sheriff Office deputy Travis Music arrived on scene, at which time Jordan Begley put his car in drive and began to flee.

Jordan Begley, the citation further said, drove at a high rate of speed through the still-operating Wendy’s and McDonald’s restaurants, and then proceeded to turn southbound onto U.S. 23. Upon coming to Clayton Homes, the citation said, Begley drove onto a back road toward KY. 32, but wrecked into a ditch at KY. 32 and busted a tire.

Several policemen, officer Kirk wrote, ordered Jordan Begley out of his vehicle, and Mr. Begley complied, but then began fleeing on foot toward Louisa, prompting deputy Music to deploy his Taser, which stopped Jordan Begley. EMS personnel, the arrest citation said, checked Jordan Begley out, but he told them he did not want to be treated.

Jordan Begley, the citation said in the finishing sentence, told officer Kirk that he was not going to answer any of the officers’ questions.

Once Jordan Begley was arrested and taken into custody by officer Kirk, he was charged with nine (9) offenses, which were as the following: