Louisa, Ky. —  Bryce Blevins was one strike from a perfect game but settled for back to back no-hitters as Lawrence Co. (22-7 ) beat Prestonsburg 6-0 on Senior night Wednesday at Randy Keeton Field. 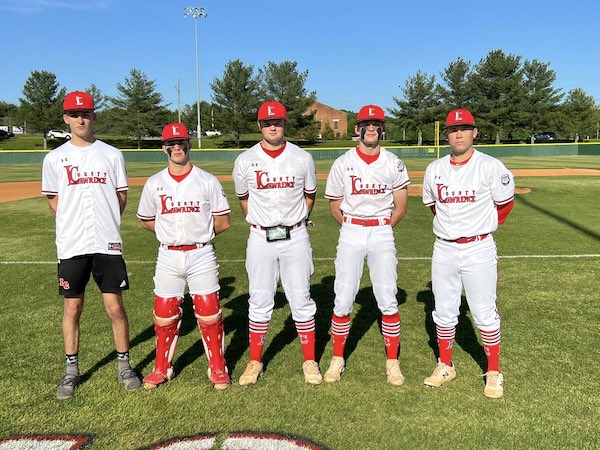 Blevins making his final start at Randy Keeton Field had a perfect game with two outs and two strikes before the Blackcat batter hit a little flare between the pitchers mound and first base and Blevins tried to flip it to first baseman Luke Patton who lost it in the sun allowing the hitter to reach and breaking up the perfect game bid.

Blevins finished with 12 strikeouts, the no-hitter and the shutout.

Luke Patton homered and threw a complete game one hitter with 13 strikeouts to lead the Dawgs to the road victory.

Blue Fletcher drove in three runs with a bases clearing double in the fifth inning.

The Bulldogs scored five runs in the ninth inning to pick up the road victory.

Blue Fletcher went the final three innings to get the victory, he also drove in a run.

Lawrence Co. finished 58th District play 6-0 and will be the #1 seed in the upcoming tournament next week at Betsy Layne.

The Bulldogs will close out the regular season Thursday at Paintsville.

“… It has been such a privilege to coach such an outstanding group of young men. I am so proud at the young men they’ve all 5 grown into. They are great kids that come from great families.

We are very excited to see their leadership on display as we are ready to make a post season run.”

“… Nick Collinsworth took advantage of the SSYP bill and came back for a 5th year and it has certainly paid off. He’s earned an opportunity to go to college and continue playing (ALC). Nick has grown up so much over the past 5 years and it’s been a pleasure to watch”

“… Blue Fletcher has as competitive of a spirit as any that I’ve coached. We’ve asked a lot of Blue and many different roles and he has accepted the challenge each and every time. I’m excited for his opportunity to continue playing at Transylvania University next year.”

“… Luke Patton is in his first year in our program and he’s been nothing short of amazing to coach. He’s showed up every single day with a tremendous work ethic and great attitude. Once Luke has gotten settled in- he’s really stepped up into a major role for this ball club both offensively and on the mound. He’s been a big bat in the middle of the lineup and the last month has been dominate on the mound. He plans to attend West Point in the fall to continue his playing career which speaks volumes in itself.”

“… Bryce Blevins words cannot describe this kids career in the red and black. He has absolutely been a warrior. He will go down as one of the most decorated and dominate athletes in our school history. I have coached very very few kids who at this age has laser focus to truly perfect his craft. His baseball maturity is unbelievable. I feel like he’s been in our program for half of my career. His mark in our program will be talked about for a very long time.”

“… Joey Moore is simply a one of a kind young man. I have attempted to recruit Joey to be involved in our program since his freshman year. His involvement with us this year has been a huge asset. I am so thankful for his sacrifices he’s made this spring for our program and our school.”

“… All five of these guys have the opportunity to do whatever they want to do in life. They have been raised the right way and have represented LCHS with nothing but class.”

FLOYD CO. WOMAN IS ACCUSED OF SLASHING A MAN'S THROAT  FROM 'EAR TO EAR'