LOUISA, KY. — Early voting begins today, May 12, 2022 for the May Primary and Lawrence County Clerk Chris Jobe said yesterday  (May 11)  his office is ready to go.

There will be seven precinct voting locations much like it was during Covid, Jobe said, but early voting Thursday, Friday and Saturday will be only at the Lawrence County Courthouse.

“We like the new system that allows us to consolidate some of the (18) precincts on election day,” Jobe said. “It is getting more difficult each year to find election officers and the expense is less.”

Since there is so few contested races, Jobe said he is “not sure” of how many Lawrence County voters will show up especially Democrats. He said absentee voting was not as heavy as it has been in recent elections. In the wake of the Obama/Trump era which turned Lawrence County into a red county when it was Democrat by nearly 2,000 votes in 2000, Democrat participation has flatlined.

Topping off most of the attention is the County Judge/Executive race where school board chairman Heath Preston is attempting to unseat incumbent judge Phillip Carter.  The race could be tighter if there is a big turnout this week and election day.

And the County Attorney job is up for grabs between incumbent Brad Derifield and newcomer Johnny W. Osborne for the nomination. Derifield would seem to be the favorite although Osborne has campaigned door to door in recent weeks.  It is yet to be seen how effective it has been.

Not many people know what the county Surveyor does but there’s a race between incumbent J. Michael Shapaka, Jr. and former surveyor Cliff West who was swept away in the Republican domination four years ago and has since changed to Republican himself.

Only two of the county’s four magistrates have opposition in the Primary.

In District 2 current magistrate John Scaggs faces Lee Peters who has experience running for the position.

Of course long time  U.S. Congressman Hal Rogers has four running against him none with much of a chance to unseat Rogers. U.S. Senator Rand Paul, who visited Lawrence County recently has five opponents and is expected to win easily.

UPDATE: In the Constable races there is more competition as the District 1 GOP race pits Charles May against Eugene Workman. In District 2 it’s Marcus Bowen,  Sam Muncy and William “Sonny” Mynher.

On the Democrat side there is only one race, the U.S. Senate nomination where favorite Charles Booker has three opponents.

Jobe said Kathy Hinkle has replaced her late husband, Lafe, as the Democrat on the county election commission. Hinkle said in an email last week that she “didn’t know for sure” who the local county-wide Democrat chairman is, but she thinks it is Louisa mayor Harold Slone.

Two candidates have registered as Democrats for the November William Spradlin for County Judge and District 1 magistrate candidate Terry Webb (D) will challenge incumbent Mouse Halcomb (R) who has no opposition in the Primary.

*** NON PARTISAN candidates for city council and school board in the November General election must sign up by June, 7 Jobe said.

No matter how many races there are, everyone who can, should vote. 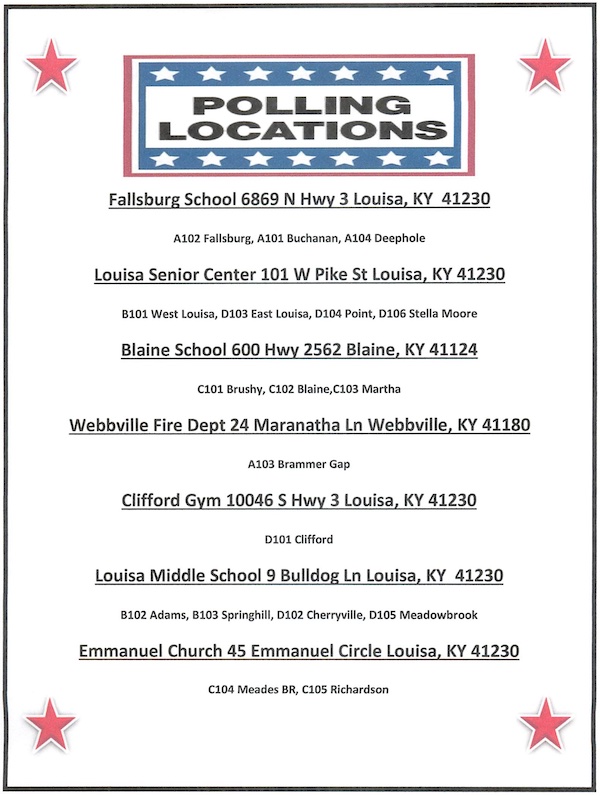 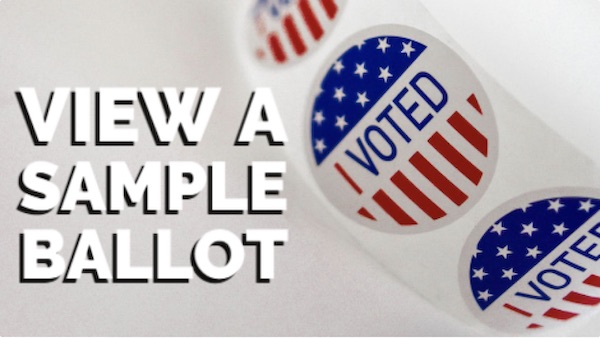 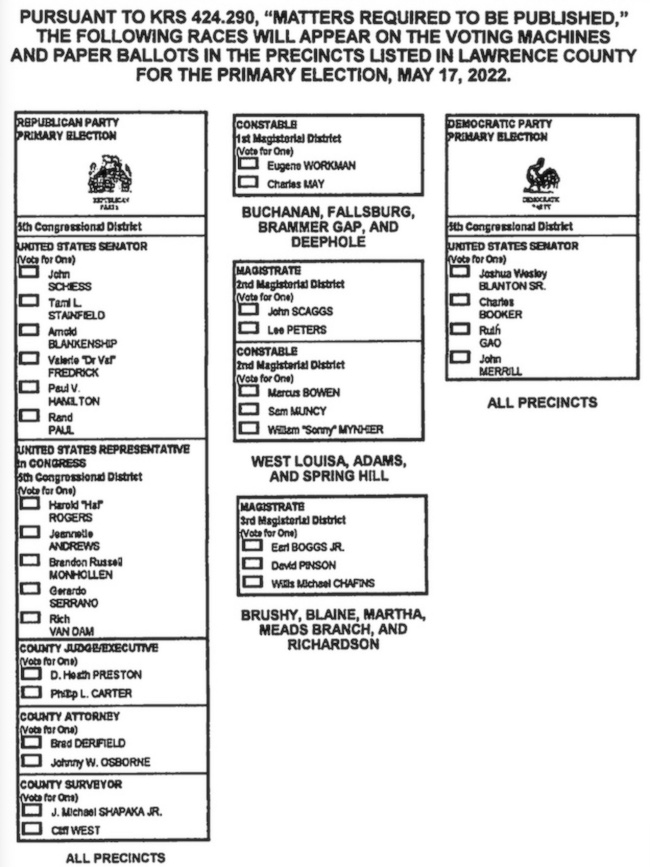 Leave a Reply to Vote for Phil Cancel reply