PELFREY, LIBRARY BOARD VOTE TO RAISE SALARIES OF ALL EMPLOYEES ON EVE OF JULY 1ST CHANGES IN LAW; STILL NO ANSWER TO “WHERE’S THE MONEY?”

The Lawrence County Public Library had a regularly scheduled Board Meeting on May 9, 2022 at 5PM. Board of Trustees Present, Director Carlie Pelfrey, Chairman John Osborne, Scott Osborn, Susie Chambers and Kim Burchett present.

In a last minute effort by 8 yr Lawrence County Library Director Carlie Pelfrey, and the board to protect themselves from the new law, SB 167, which allows the local fiscal court to choose board members, the board gave raises to the staff and agreed to produce a ‘contract’ for all staff including Ms. Pelfrey, which they have never had, she said.

Possibly fearing the July 1, 2022 changes of the library board’s makeup and their ability to spend the taxpayers money when SB 167 goes into effect, Ms. Pelfrey and the board on motion of Marc Lester and second by Scott Osborne with all voting yes gave Ms. Pelfrey and all Library employees an 8% raise in pay plus $2,000 for a health plan.

The board also voted to come up with “contracts” for the employees but did not specify how long the contracts will be for.

Pelfrey again on Facebook Live , which she says she set up after Lazer stories from past weeks, but she and the board still refused to give the bank or banks, addresses, and whatever the balance of the library reserve monies is and where they are are kept.

4. Staff Discussion – Board Members discussed 8% cost of living raise for library employees, Pelfrey said It has been 4 yrs since library employees have received a raise but only she and her assistant have even been working for four years. Motion by Marc Lester, 2nd by Scott Osborn. Then Pelfrey said “I have been looking at Contract drafts for employees at the library and it protects our jobs. There is also an At-Will Clause for Part-time.” Motion by Kim Burchett, 2nd by Scott Osborn. Then discussion over Full-time employee’s of library so they can be contracted also. Motion by Marc Lester, 2nd by Susie Chambers.

5. 2023 Health Insurance- Discussion over health insurance increase in premiums of $2,000 for all employees combined. Motion by Susie Chambers, 2nd by Marc Lester. None Opposed.

7. Board Update- Chairman John Osborne asked if this reporter had everything I needed on the Open Document Records, I told him, No, I need #4 answered. But Carlie said for me to respond to her email, Salyer sent another email asking for Pelfrey to give the names of bank or banks and address after the library board meeting.

8. Public Comment- Pelfrey said “We are working on a big project in Genealogy, 1880’s project for the Big Sandy News to digitize there microfiche.

Also Denna Farris discussed the breakfast and lunch program this summer at the library and said last year we had 8,000 attend the lunch program. “Dee’s Restaurant owner, David Gauze makes all food prepared for this occasion. This is a special event and it’s very close to my heart,” Burke said. Bidding packages were sent to Food City, Walmart, Hillbilly Hibache and Dees. Dees was the only business to respond.

Pelfrey also discussed removing small magnets on the two resource vehicles and replacing them with ‘all body wrap’ so they will be recognizable to the public. No price was discussed.

Alexa Adams-Robertson attended the meeting on behalf the the state dept. of Libraries and ArchivesKDLA for the first time. She is the regional consultant to 30 libraries in eastern Ky. This was her first visit to Lawrence County. 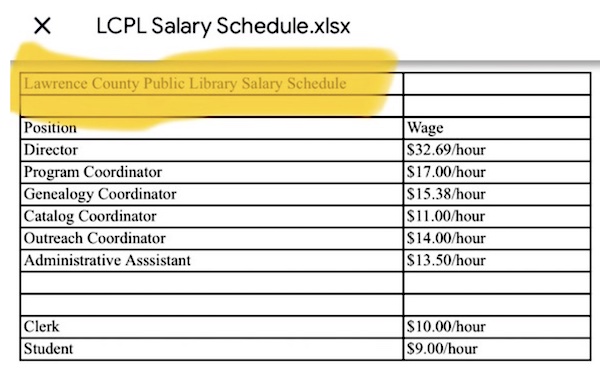 (Editor’s note: If you have any reason to question the facts in this story, please watch Ms. Pelfrey’s Lawrence County Library Facebook Live)

NOAH THOMPSON COMING TO LOUISA PARADE AND HIS FREE CONCERT FOR ALL….