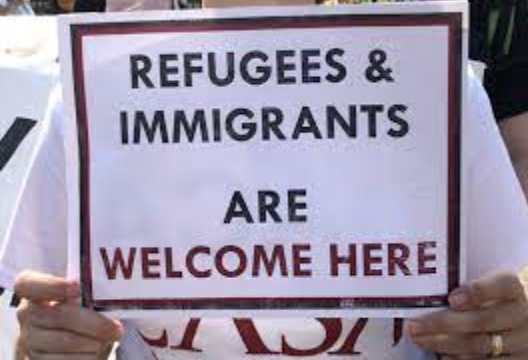 The outcome of Sen. Chris McDaniel’s significant, insightful Senate Bill 195 in the 2022 General Assembly was undecided as this issue went to press. What is definite, though, is Kentucky will win if our state embraces the refugee and immigration-friendly goals this legislation encourages.

McDaniel, a Republican from Kenton County who chairs the Appropriations and Revenue Committee, introduced SB 195 in March after refugees began pouring out of Ukraine because of Russia’s invasion. SB 195’s central aim is that Kentucky would establish a refugee support fund of $50 million to provide $10,000 apiece to as many as 5,000 families fleeing war.

It calls also for Kentucky colleges and universities to waive tuition and fees for students whose families are aided by the refugee fund.
The moral and emotional arguments are overwhelmingly in favor of this being the right step for Kentucky to take at an important time. Regardless of whether the war in Europe is a so-called “hinge of history,” there are many economic reasons this would be a wise investment by Kentucky in its own future.

Immigrants own their own business at twice the rate of the U.S. population, making them prolific job creators and taxpayers—good citizens who contribute to the betterment and enrichment of society.

Kentucky, like every U.S. state and most of the industrialized world, needs more workers—able-bodied as well as highly skilled. The commonwealth has the second-lowest workforce participation rate in the nation. It is a complex situation that will take years to unravel and improve and will probably require making progress against our worst-in-the-nation rate of cancer and other health problems.

Meanwhile, at least five years ago Greater Louisville Inc. made it a workforce policy goal to recruit immigrants to the region and the city has evidence to show the effectiveness of being welcoming and supportive.

Louisville has the second-largest Cuban immigrant community in the nation. A Cuban couple there publishes a magazine to educate refugees and immigrants on successfully navigating the everyday requirements of American life such as getting a drivers’ license, grocery shopping and paying taxes.

For years Lexington has been the top-requested U.S. destination city for immigrants from the Democratic Republic of the Congo, the home country of hard-working Kentucky basketball favorite Oscar Tshiebwe.

Speak with anyone who works in the schools and you will learn that these families value education very highly; parents are reluctant that a sick day be taken. The Lane Report’s comptroller a decade ago was a member of a Bosnian war refugee family that came to Lexington in the 1990s; she left us after several years to launch her own business with her sister.

In this time of full state Treasury coffers, if Kentucky spends $50 million helping refugee families resettle here, word of this policy will travel far and wide and bring the commonwealth a stronger, more diverse, more dynamic, more innovative, more prosperous future. And it is the right thing to do.

From The Lane Report