OFFICER SUFFERED ‘FRACTION OF AN INCH’ NEAR FATAL GUNSHOT FIRED FROM SUSPECT, WHO IS FROM BOYD COUNTY 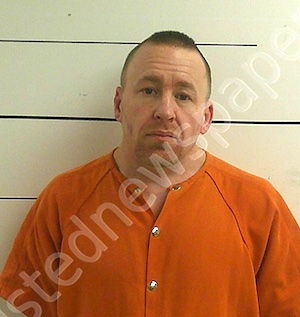 THE MAN WHO ALLEGEDLY SHOT A FLATWOODS, KY. POLICE OFFICER EARLY MONDAY MORNING: JONATAHN LEE SMITHERS, 42, OF CATLETTSBURG, KY. (MUGSHOT PHOTO OF SMITHERS TAKEN ON JANUARY 17, 2022; AT THE BOYD COUNTY DETENTION CENTER, AFTER HIS ARREST BY THE CATLETTSBURG, KY., ON FELONY BURGLARY AND CRIMINAL MISCHIEF CHARGES)

What started out as a suspicious person call ended with a police officer being shot and seriously  wounded in Greenup County, Kentucky early Monday morning. 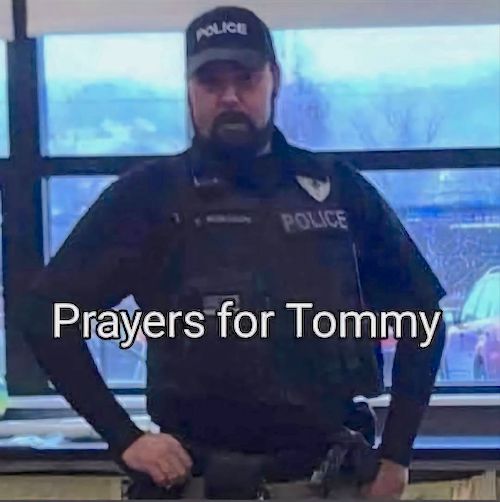 According to reports from local law enforcement officers, a Flatwoods, Ky. city police officer has been shot, and a manhunt for the person who pulled the trigger was ongoing.

The shooting happened about 2:30 A.M., Monday morning, in the 100 block of East Street, in Flatwoods. The Kentucky State Police say the Flatwoods Police Department officer was responding to a 911 call of a suspicious individual in that area.

The officer, who is yet to be identified, was flown to an area hospital. The officer was said to be in stable condition after undergoing surgery according to state police. The KSP later revealed that the officer had been shot in the neck

Meanwhile, the Kentucky State Police had released a short video clip of a person that police believe could be the shooter of the Flatwoods officer.

However, the police got a lucky break, when a Kentucky State Police trooper spotted their alleged suspect. 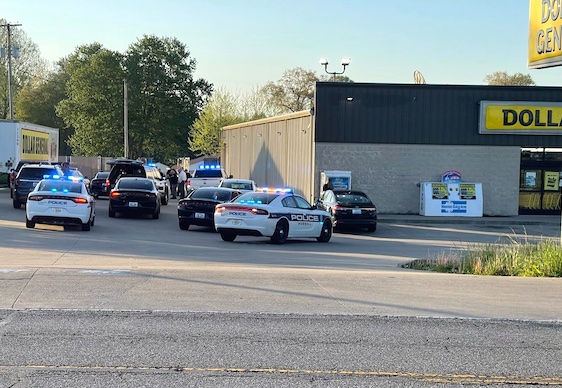 THE DOLLAR GENERAL STORE IN FLATWOODS, KY. WHERE THE SHOOTING SUSPECT OF THE FLATWOODS POLICE OFFICER, JONATHAN LEE SMITHERS, WAS ARRESTED BY THE KENTUCKY STATE POLICE MONDAY MORNING.(PHOTO TAKEN BY WSAZ).

The suspect taken into custody was identified by the KSP as Jonathan Lee Smithers, 42, of Catlettsburg, KY., who was spotted by a Kentucky State Trooper near a Dollar General store, where he was apprehended.

For an unknown reason(s), Jonathan Smithers also had to be taken to a hospital for treatment, but he now has been released from the hospital, officially arrested, and is now on the way to the Boyd County Jail in Catlettsburg.

In a boomerang effect related to the search of the officer shooting suspect, Russell Independent Schools were closed Monday due to initial safety concerns.

Russell Independent Schools officials released they following statement about the situation that led to their schools closing decision:

“This morning at 4:10 A.M., the District was notified that a Flatwoods Police Officer had been shot and that the suspect had not been apprehended. All local law enforcement along with the Kentucky State Police began a search for the suspect who was considered armed and dangerous and was last seen in the area of Walnut Street in Flatwoods. At that time, I made the decision to close our campus for the day. The safety and security of our students and staff will continue to be our first priority. We would like to thank all local law enforcement for keeping our community safe. Please keep the wounded Flatwoods Officer in your thoughts and prayers,” said Russell Superintendent M. Sean Horne.

Later Monday morning, Kentucky Governor Andy Beshear released a statement on his official state government Twitter account about the Flatwoods officer who was shot and wounded:

“Britainy and I are praying for the Flatwoods police officer injured in the line of duty this morning. We are grateful for his bravery and we hope he makes a full recovery.”

In a final ironic twist, law enforcement officials in Greenup County confirmed that the 911 dispatcher on the other line of the Monday morning shooting call was the wounded officer’s sister.

GRUDGE MATCH WITH WAYNE DEPUTIES WRESTLING THUGS FOR CHARITY MAY 20!