Bryce Blevins struck out 16 Timberwolves including four in the seventh inning on Friday. 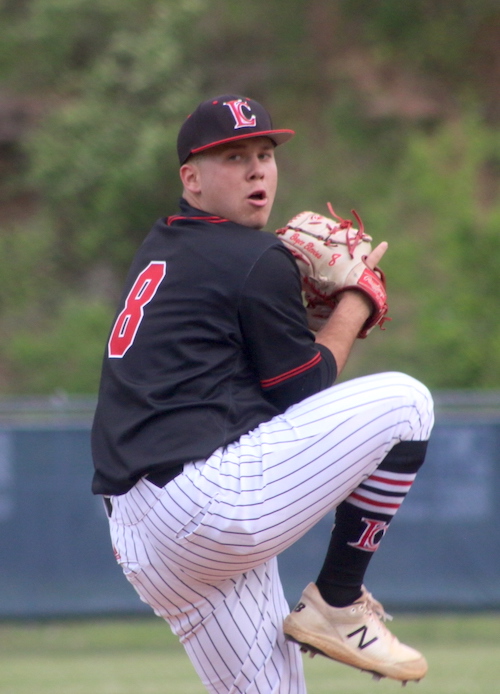 Blevins bounced back nicely from his first loss of the year to beat a very good Timberwolves team.

The Dawgs scored two in the top of the first and that was enough for the senior left hander who is approaching the record for most wins in school history which is currently held by Chandler Shepherd.

Luke Patton singled twice and scored two runs, Grover Maynard doubled and drove in one, Eli Fletcher singled, drove in one and scored once, and Abner Collinsworth singled and in a run, Blue Fletcher, Blevins and Will Lafferty all singled once.

Luke Patton fires to Will Lafferty to record the out on a Bryce Blevins pickoff. 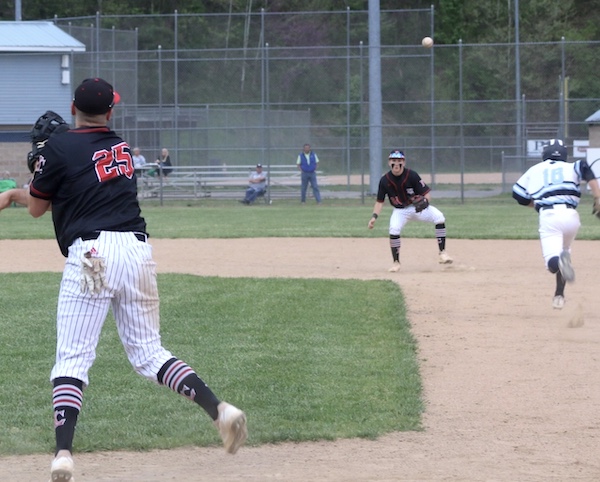 Luke Patton pitched six innings, gave up three hits, struck out eight and only walked two Raiders to get the win. Eli Fletcher pitched the seventh and allowed one hit. They also had two hits and one RBI each.

The Dawgs fell at home against the Tomcats.

Grover Maynard heads toward second for a double against Spring Valley Friday. 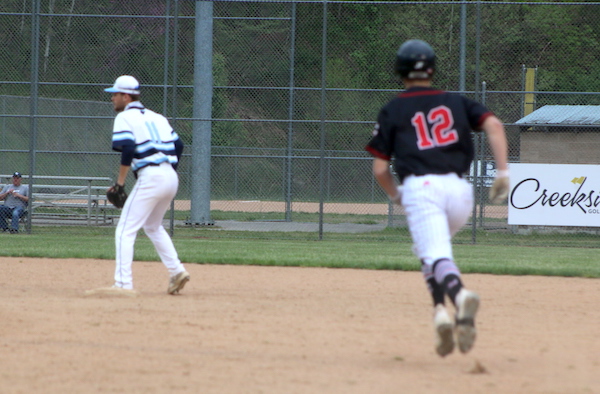 The Dawgs will play five games in five days beginning on Monday with a trip to Ashland, on Tuesday they will host Johnson Central, on Wednesday and Thursday they will play in the Peoples Bank classic at Greenup Co. versus Jackson ( OH ) and Wheelersburg ( OH ) before hosting Huntington ( WV ) on Friday.

Bulldog centerfielder Nick Collinsworth lays out for the nice grab in the first inning Friday night. 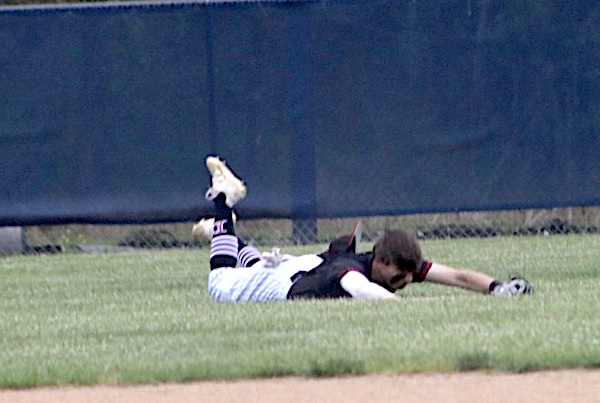 “… We went out of region on Thursday and out of state tonight and Luke Patton was a stud against East Carter and Bryce Blevins was a stud against Spring Valley. That’s exactly what you want out of the top of your rotation. The calendar is going to be turning over to May in a couple days and it’s go time now. Both of those guys looked like they were in postseason form. East Carter and Spring Valley both have nice teams and have had good years. Really proud of our guys for battling tonight. Coach Austin Pratt told me he was going to throw a different guy every inning and if you got guys that can throw strikes that is a great strategy. It’s not easy to hit a different guy every inning bout I thought our guys adjusted well from inning to inning. We were a hit or two away early on to breaking this thing wide open but tip your hat to those guys for keeping us at bay.”

“… Monday was ultimately a trap game and I knew it. We had an emotional weekend and our kids didn’t play great even in our wins but our kids have a ton of fight in them but we picked a bad night to have a bad night last Saturday night and then you come all the way home and then I have them off Sunday and not making any excuses because Ashland came ready to play and we didn’t and they beat us. I think we got the boys attention and we have had a great week since. We will have a chance to get back at Ashland on Monday. Talon Pollack pitched good enough to win on Monday and he has a really good arm and that was good to see out of him. I think he has figured some things out and that really gives us some pitching depth with him and Will Lafferty and Jake Derifield. Hopefully as we are going down the home stretch we can get some depth to win a region championship.”