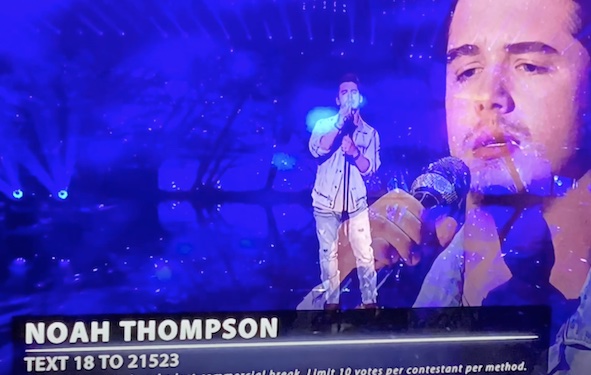 Last night on American Idol, ABC 8PM, Noah Thompson continues the road to success. Thompson was in the “Top 10” last Tuesday, and after last night’s performance he remains in the “Top 11.”

Thompson, 20, of Blaine, Ky. had planned on singing “Nobody to Blame” by Chris Stapleton last night. After an interview with Gabby Barrett, American Idol on “Season 16” Thompson decided to change his song to “Stand By Me” and it was a hit with the judges, crowd and fans voting for him.

The AI judges, Luke Bryan, Katy Perry and Lionel Richie were giving Thompson good praises, the fans voted Thompson to continue on his journey of American Idol. There are 5 more scheduled shows that Noah Thompson has to win to become the next American Idol of “Season 20.”

The next American Idol show on ABC will air tonight at 8PM. Tonight’s episode of AI will be called “Judges Song Contest.” There are only 5 shows left on Season 20 of American Idol. There are a total of 20 shows on this AI “Season 20” ending on Sunday May 22, 2022. GO #TeamNoah !!!!

These are the last 5 shows:

Show 17-The Great Idol Reunion-Monday May 2nd at 8PM