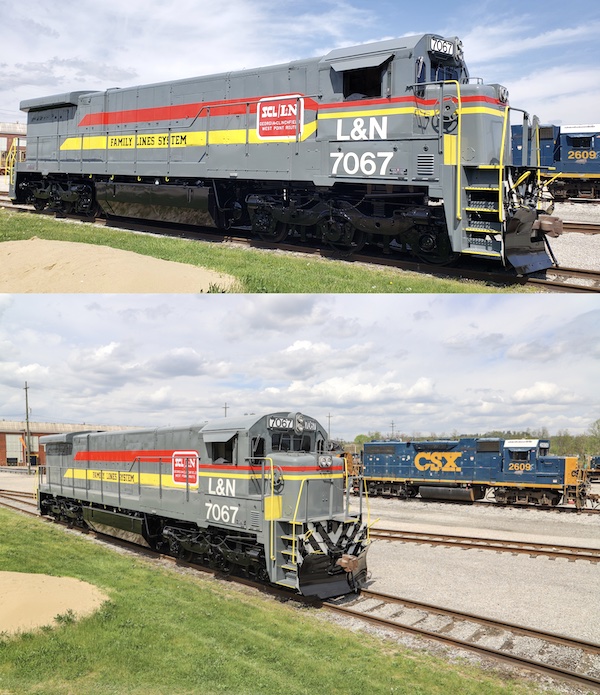 Huntington, West Virginia — This week, the CSX Huntington, West Virginia shops will roll out another freshly painted locomotive, as is done routinely by the Jacksonville, Florida-based Fortune-500 transportation company. On Monday, however, their most recent rendering is a homage to a vanishing era in American railroading; a cosmetically restored General Electric C30-7, a locomotive that ruled the rails in Appalachia over three decades ago.

Former L&N 7067, an engine that was in danger of being scrapped just a year ago, emerged from the Huntington Shops on Monday looking much like it did in 1980 when it was delivered for the (CSX predecessor) Louisville and Nashville Railroad. The transformation is thanks to an unlikely turn of events, highlighting a continued collaboration between CSX Transportation and the Irvine, Kentucky-based 501(c)(3) nonprofit Kentucky Steam Heritage Corporation.

Last May, Kentucky Steam negotiated the donation of the locomotive from the Collis P. Huntington Railroad Historical Society, which was in the process of liquidating some of its assets. The engine, located in an industrial area of Huntington, was deemed as surplus. Because it was too costly to move for many rail preservation groups, the historical society was beginning to solicit bids to have the engine disposed of.

“Not having the facilities to restore it and knowing it was a rare engine, we looked for a group that had the means to restore it to its original appearance,” said Skip Reinhard, president of the Huntington, West Virginia-based railroad nonprofit.

“We did not want to scrap it, knowing its history. Kentucky Steam was the organization we found that had the facilities to restore the engine, and their leaders accepted our donation,” Reinhard said.

Chris Campbell, Kentucky Steam’s president, said the donation proved exciting, yet challenging for the fledgling organization, still only in its sixth year of existence.

“The engine is exactly what anchored the ex-CSX shop facility that we now own in Appalachian Kentucky,” he said. “But being in the midst of several resource-intense restoration projects, we viewed 7067 as an eyebrow-raiser. We wanted to save it, but didn’t know when we would have the means to make it worthy of displaying at our growing railroad campus.”

In late summer, 2021, the engine was towed several miles from its display site to the Huntington shops where it was stored until it could be readied to be shipped to Kentucky. Meanwhile, a plan was proposed to have the engine cosmetically restored to its as-built paint scheme, a livery that hasn’t been seen in some thirty years. CSX worked the engine into their busy paint shop schedule and utilizing diagrams provided by the L&N Historical Society, crews turned out a shining example of what ruled the rails some 40 years ago.

“CSX has been an excellent corporate partner over the years, and this is another example of how they have shown a commitment to helping us tell the story of railroading in Appalachia,” said Campbell. “We are grateful to all the employees who have contributed to this project. CSX has proven time and time again to be a first-class organization.”

Kentucky Steam is no stranger to generosity from CSX. In 2019, they received two large donations from the railroading giant: A fully refurbished 1969 Chesapeake and Ohio Railway caboose as well as a similar-vintage operational L&N-heritage diesel locomotive, both of which are current stars for KSHC’s seasonal operations on their 40-acre campus in Estill County, Kentucky. 7067’s cosmetic revival is a significant accomplishment for the two organizations, as the engine is one of the last remaining of its kind in the United States.

After it was retired by CSX in 1999, it was painted in Marshall University colors by the CSX Huntington Locomotive Shop and was used for years in the area at university functions. After several years, the engine was unable to find a long-term home, so it was given to the C.P. Huntington group in 2017 by CSX and stored in their South Yard. Meanwhile, nearly all other C30-7 engines in the United States have been disposed of.

The Kentucky Steam Heritage Corporation was founded in 2015 with the intent to restore and operate the historic steam locomotive C&O 2716 which was leased on a long-term basis from the Kentucky Railway Museum, in New Haven, Kentucky. In 2018, Kentucky Steam purchased a large portion of a former CSX railyard in Ravenna, Kentucky, and established a rail servicing facility in the former car shop complex. The complex itself once also housed a locomotive servicing station which was host to 7067 and other locomotives like it. Kentucky Steam plans to make the engine an interactive display at their developing rail-based campus called “The Yard.”.

“As we develop our attraction, we feel that it’s important to pay homage to the various eras of railroading that have been important to the Appalachian Region,” said Campbell. “This locomotive will honor a relatively recent era, one in which several of our members actually participated.”

Kentucky Steam will receive delivery of the refurbished engine later this spring. The locomotive itself will find a prominent display spot at the “The Yard” when KSHC finalizes major renovations to their campus, partially thanks to a Federal EPA Brownfields Program award announced last year.

A dedication ceremony is being planned for later this summer, and the locomotive will be prominently displayed during the group’s summer “Engineer U” program which features an opportunity for visitors to learn how to operate a locomotive. KSHC also plans summer visitor hours which will provide the public the opportunity to see the continued progress on the restoration of the C&O 2716 and other projects. Engineer U tickets will go on sale Sunday, May 1. For more information, membership and sponsorship opportunities or to make a tax-deductible cash or in-kind contribution to the project, visit www.kentuckysteam.org.

The Kentucky Steam Heritage Corporation (KSHC) is a Kentucky-based 501(c)(3) non-profit organization operating with the intent to educate, entertain and inspire past, current, and future generations by operating historic rail equipment. The hallmark of our efforts is the restoration of Chesapeake & Ohio Railway steam locomotive 2716 to operation. The restoration and operation of 2716 and other historic pieces will prove to be living history and will serve as an educational tool, enhancing heritage tourism and stimulating economic growth in Eastern Kentucky.