by Lazer Staff
in Sports
Share on FacebookShare on Twitter
Owensboro, Ky. — Lawrence Co. finished runner-up in the Class 2A State Tournament after falling 14-2 versus Pudacah Tilghman ( 16-3 ) in the championship game Saturday night at Jack Hicks field at Shifley park.

Bryce Blevins suffered the loss on the mound, Luke Patton homered and singled, drove in one and scored once, Eli Fletcher singled and scored a run.

Luke Patton hit a two out grand slam to give the Dawgs a 8-7 lead in the top of the seventh inning and Bryce Blevins closed out the victory with a scoreless inning to put Lawrence Co. in the championship game.

Blue Fletcher recorded the win in relief by going 1 and 2/3 innings and Blevins for the save.

The Bulldogs will have a busy week beginning Monday at home versus Ashland, Wednesday at home against Huntington ( W. Va. ) and then travel to Grayson to face East Carter.

Class 2A All Tournament 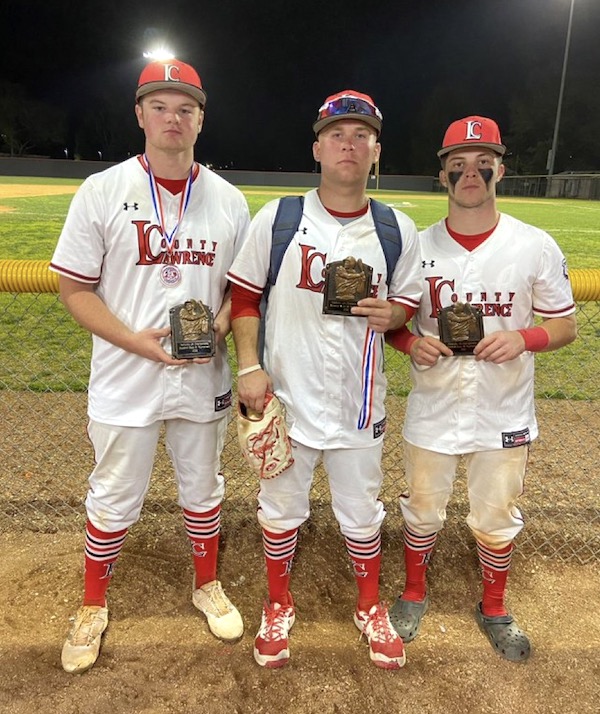 “… Very proud of our boys. Huge step for our program. We take a lot of pride in the 2A

To play for a state championship is a remarkable fete. Our boys battled through plenty of adversity just to get there.”

“…The semi-final match up with CAL had a lot of big moments. We kind of shot ourself in the foot several times offensively and defensively early to fall behind. And it just had that feel that we were going to strike for a big inning eventually. Baseball is timeless and that 7th inning proved out.

Luke Patton had one of the biggest clutch hits in the history of our program with the go ahead grand slam. But man there were so many huge at bats to lead up to that moment as well.”

“… We fell short in the championship game. We certainly did not perform to the level we expected to, but I have to give all credit to Paducah Tilghman. They are really good and out played us that night.”

“… So proud of our kids for their fight and competitive spirit and excited to move on to the home stretch of our season.”