My first memories of high school were begun in times well before I was a student. The first mind pictures I remember are faded, somewhat foggy, and even a little like ghosts of the past. Still, some events jump out of my memory bank as if they were yesterday’s experience. For example, I was still a preschooler when my mother took me by the hand and walked me those few blocks from the Louisa Inn up to the high school, which I would soon love as more than a mere footnote in my life. She wanted me to see and experience the excitement of the large crowd of students and folks from all around our little town. She meant to introduce music, chatter, and the noises of a Friday night football game. I’m sure my eyes were wide as I was pulled fearfully closer to the assembly of the schools band members, each wearing a uniform that was the same as mother wore only a few years prior. These red and black uniforms brought back her memories of that earlier time when she and her fellow band members wore on the streets and ballfields of her day. Perhaps it was because of her memories that she dared drag me very, very close to the band that was gathered just outside of the gates that led onto the fenced in playing field that would become the focus of the evening. Because she dared to draw so close, I soon spotted the large bass drum with a picture of a fierce bulldog bursting through the skin head of the instrument. It was as a visual representation our football team called, ‘the Bulldogs.’ That drum was used when mom was a band member. It was still used years later, when I was drum major, and would lead the band and majorettes and myself onto the field during pregame. Near the gate the doors of the locker room burst open and the team ran down the steps and through the gate on out onto the field. I remember the sound of cleats hitting a sidewalk as the herd of players passed by. That clatter made me want to have a pair of cleats, even if I didn’t understand their purpose. 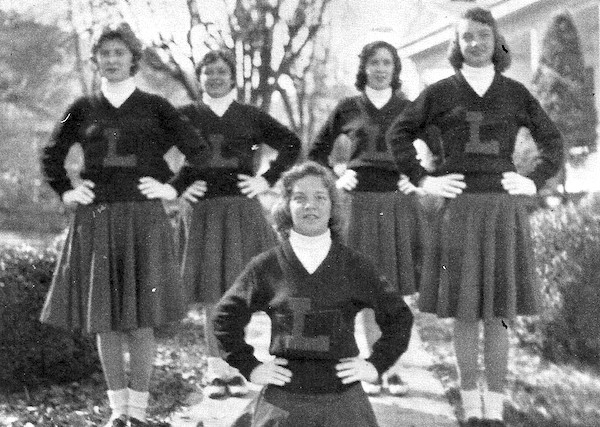 Mom taught me about our national anthem and how important it is to respect the flag and the music. By doing so we showed respect to our wonderful country. She instilled in me that strong reverence that represented the love we had for our home, our country, and those wonderful bulldogs. Once we were in the stands we sang the Fight Song that still causes me to swell up with pride. This was ingrained in me and I tear up even today when it is sung.

In those days both the visiting team and the home team would join the crowd in respect of our God in a prayer asking that no one would be hurt in the game to follow. My heart cannot forget how it seemed right to give thanks for the freedom just recently fought for in the war. The dots were connecting even at that early age.

Still holding hands, mom and I sat on the bleachers and cheering in response to the leadership of a small group of cheerleaders. They looked so pretty in their outfits as they stirred our emotions. That evening was special, as were those that followed in seasons experienced over the years. It was altogether fitting that I later became a player in those events as the drum major who led the band out onto the field. It makes sense since my mom played in the band during her years there. Music and sports have remained an important thing in my life. Later, when I was in the Air Force, I played in the band for a time. Even after transferring to other positions I sang in church choirs and finally became the choir director. Over the years, I learned to love classical music as well as popular, and religious songs. I’ve come to enjoy bluegrass, gospel, and most other genres, too. It all began when as a high school student, my mom took up playing a trumpet and I followed in her footsteps. I love it still.

How wonderful it was when our team won the game. Oh, we loved the bulldogs regardless, but victory is sweet and can’t be overstated. When I was a teen, I looked forward to gathering downtown after a game to celebrate each game. We were proud of our ‘boys’ regardless of the final score.

As we grew, the meaningful things grew, too. Not only did we cherish the sporting events, but even the classroom lessons we were taught. At first we were a little intimidated by our teachers, but we learned soon enough to respect them, perhaps even love them almost as family. Those buildings were part of our lives. For many, so too were the yellow school buses. We discovered new friendships and new traditions. Even those times when ‘letter jackets’ were passed out, or class rings, and our own copies of the ‘Scarlack’ annuals. These built memories that can be refreshed with the turn of a page. Finally, graduation loomed and it was time the gang was broken up. Some went to off to colleges, and some got jobs. Others joined the military. Still, the memories remain. I can see the faces of long ago of those with whom I grew up. In fact, in this new computer age we are able to stay in touch with many of our old friends and classmates.

Yes, I still remember the football games, the basketball games, the parades, the concerts, dances, and even the old buildings that made up the campus of Louisa High School. I remember the teachers, senior plays, donkey basketball, professional wrestling, field trips, and guest speakers, as well as evangelists that delivered sermons before it was considered illegal. I have not forgotten that wonderful bass drum with the Bulldog, nor the evening of long ago when mom introduced me to the excitement of a Friday night football game.