This week marked the official end of the 2022 Regular Session, the veto period and the two subsequent days for the General Assembly to override Governor Andy Beshear’s vetoes. In addition to the overrides, we were able to pass a few additional bills, which we expect to be signed into law.

With a supermajority in both chambers of the General Assembly, the Republican Party currently represents the conservative values of the majority of the commonwealth’s voting residents. Multitudes of vetoes from the Governor speak to social and cultural issues, but also to the commonwealth’s morality. These policy initiatives included pro-life measures, protecting the integrity of women’s sports, strengthened oversight of state government, and an improved education system offering greater opportunity and choice for students and families.

In the latest effort of the General Assembly to champion pro-life legislation and be a leading national voice for the voiceless, we passed House Bill 3, banning mail-order abortion-inducing pills and requiring a judicial review for all minors requesting an abortion. House Bill 3 also included language from Senate Bill 231 banning abortions after 15 weeks. The Governor chose to veto this pro-life bill, but fortunately we were able to override and enact the bill into law.

It’s likely that allies of the Governor opposing Kentucky’s pro-life legislation will file a lawsuit against House Bill 3 as they have against past bills aiming to protect the unborn. A previously passed pro-life bill currently sits before the US Supreme Court and Kentucky Attorney General Daniel Cameron; he, along with our large coalition of pro-life advocates, are eager to continue defending these measures with the potential of overturning Roe v. Wade.

In addition to pro-life legislation, the Governor vetoed the Senate’s bill ensuring fairness in women’s athletics. Senate Bill 83 requires those competing in female-sanctioned sports must be biologically female, which applies to all sports from the sixth grade through collegiate level athletics. Under Title IX, women have worked incredibly hard to have equal opportunity in sports, and allowing biological males to compete against females negates their many years of sweat and time investment. The Senate stands in solidarity with dedicated female athletes, which is why we overrode the Governor’s veto.

Riley Gaines, a female swimmer for the University of Kentucky, attended Senate proceedings on Wednesday and was given the opportunity to speak on her experience competing and losing a trophy to a transgender female. Sen. Robby Mills held a press conference along with sponsors of the bill, showing support for Gaines and other female athletes across the state. Her visit highlights the importance of this legislation and its goal to protect Title IX and the Kentucky girls and women competing under it. 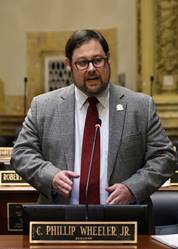 Senate Bill 1 restructured the public school site-based decision making councils, putting final curriculum decisions with each district’s superintendent. This provides accountability for the selection of curriculum, as superintendents are selected by the school board and the school board consists of elected officials who answer to voters in the district. Kentucky is the only state with these councils, which is unsurprising when realizing how unknown their existence is to the public and the fact parents’ voices are disproportionate on the councils compared to teachers and school administrators. Senate Bill 1 strengthens community voices by ensuring the ability to effect change via local school board elections is not in doubt.

Included in Senate Bill 1 are the new United States history standards, requiring the instruction of 24 original, primary source, core documents foundational to the fabric of our country. These new standards simply conform to middle and high school education standards with those already present in elementary education. The bill promotes unity around the core principles that make America the country it is.

It has been a tremendous session and I have strived to serve you and our district well.