With the conclusion of week 13 of the 2022 Kentucky General Assembly, the session has now entered the veto recess period. Lawmakers worked late into the night to ensure critical legislation was sent to the Governor ahead of the veto period. The House and Senate passed over 100 bills this week.

The veto recess period allows the Governor an opportunity to review and consider the legislation the General Assembly has passed. My colleagues and I in the state Senate and state House of Representatives will return to Frankfort for the final two days of this session on Wednesday, April 13, and Thursday, April 14, during which we have reserved the opportunity to override any vetoes the Governor issues on the bills passed by the General Assembly. We will still have the opportunity to pass additional bills, but if those bills are vetoed, they will not be overridden.

The state budget bill cleared the Senate without a single vote in opposition. This is a testament to the diligent and careful planning put into the bill over the past several weeks. Hundreds of hours have been invested into crafting the state’s spending plan, with careful consideration of the best interest of Kentuckians in mind. The investment of Kentucky taxpayers’ time and energy made the funding opportunities outlined in these budget bills possible.

Despite the many challenges thrown our way these past two years, the spending plan for the next two years took advantage of the unique funding opportunities available while remaining fiscally responsible and conservative with our precious tax dollars. We are addressing the issues from COVID-19 and natural disasters head on; investing in our state employees like never before with significant pay raises; making further historical investments in education with charter schools, curriculum updates, and paying into the state teacher pensions; and creating a safer and brighter Kentucky home for our families and children.

Even though week 13 only consisted of two legislative days, it was without a doubt the most productive of the session in terms of the number of bills making their way through the process. There were a number of bills that reached the Governor with the Senate’s fingerprint on them, which I was happy to support. ” 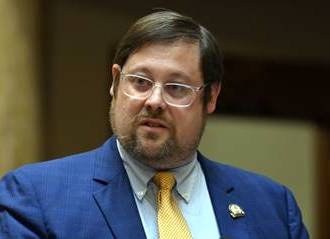 I am eager for the implementation of these bills and others into law, as I trust they will continue to move our state forward in a positive way. I will keep you updated on the status of the numerous bill awaiting a decision from the Governor along with those which may need further action from the legislature.

As always, I am here in our commonwealth’s capitol fighting for your best interest. It’s an honor to serve as your senator and voice in Frankfort.

LAWRENCE COUNTY IS HAVING AN EASTER PARADE!