Louisa, Ky. — Lawrence Co. outscored three opponents 58-0 this week to improve to 8-1 on the year.

Bryce Blevins picks off a runner for the third time this season. 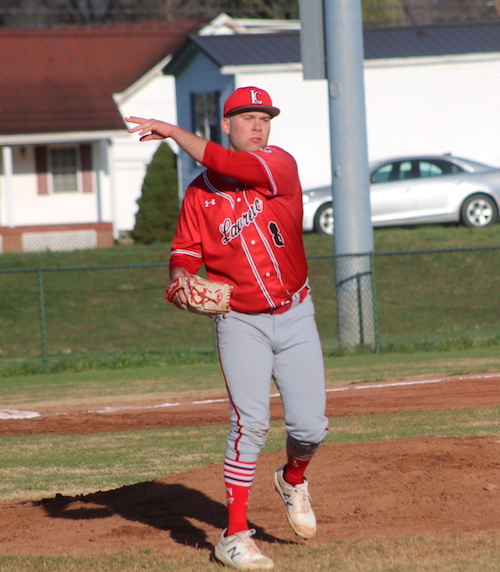 The Dawgs improved to 4-0 with the no hitter against the Bobcats at Randy Keeton Field.

Grover Maynard helped lead a Bulldog offense that put up 58 runs in three games this week. 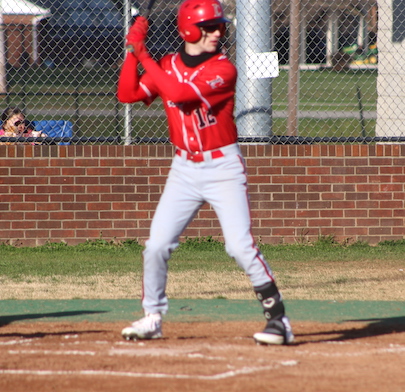 Bryce Blevins went 5 for 5 and and drove in ten runs and also set a 15th region record with three home runs including two in the 5th inning with one being a grand slam to lead the Dawgs to the District road victory.

The Dawgs pounded out 26 hits and scored a school record 30 runs.

Dylan Whitt jogs off after doubling against Greenup Co. on Monday. 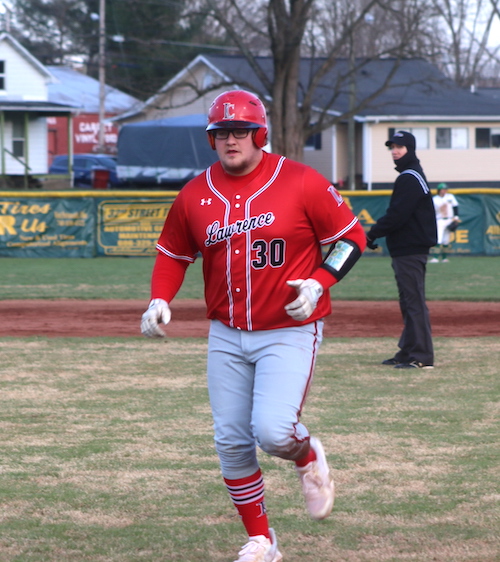 Will Lafferty went the first three innings to get the win. He struck out six and never gave up a hit. Jake Derifield gave up one hit and struck out two in his two innings of work to close out the win.

Blue Fletcher picked up three hits including two doubles and drove in four runs, Nick Collinsworth racked up four hits, including a double, drove in three runs and scored five runs, Mason Preston had two hits including a double and knocked in two runs, Blake Prater doubled and scored two runs, Cody Crum singled and knocked in two runs, Luke Patton and Ryan Marcum had two hits and one RBI each, Talon Pollack singled twice and drove in a run, Grover Maynard singled and drove in a run, Abner Collinsworth, Jake Derifield and Eli Fletcher had one RBI each, Will Lafferty singled.

Blue Fletcher fires to first base to complete the strikeout versus Greenup Co. 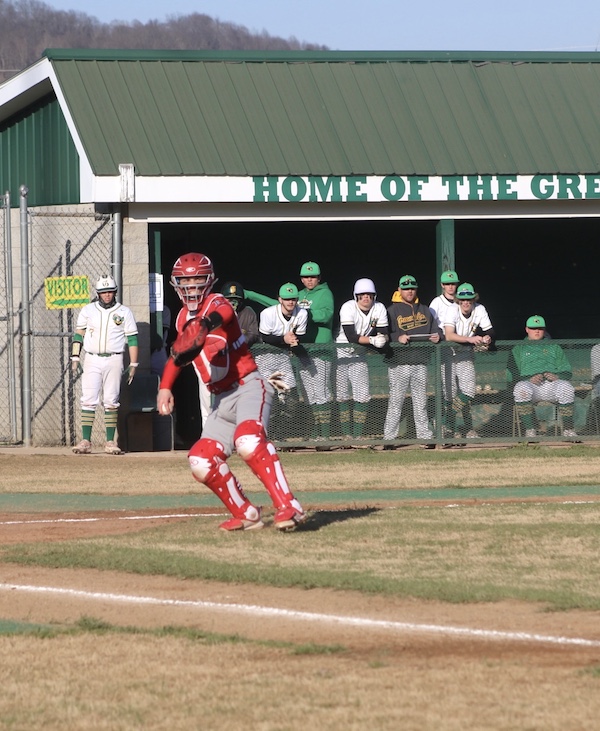 Bryce Blevins went four innings to get the win. He allowed two hits, one walk and struck out five Musketeers. Luke Patton struck out two and allowed one hit in one inning of work to close out the victory against previously undefeated Greenup Co.

The Dawgs will head to Myrtle Beach and play five games beginning Sunday versus Franklin-Simpson out of Kentucky at 5:15.

On Monday morning they will play Fort Thomas Highlands at 11:45 and then play North Bullitt at 5:45 Monday evening.

“… We knew coming to Greenup Co. that we were going to get pitched to. No matter who they got we know they are going to pitch. Steve Logan does a great job with the pitching staff and Greg Logan always has his team prepared. I promise you it’s not easy to score runs on Greenup but fortunately we got it rolling in the third and fourth innings. I think this is a sign of what we could be, I love our team and love what we are capable of doing. You give Bryce Blevins a couple of runs and it’s typically over but if you give him thirteen it’s really over.”

“… We thought it would be a quick game but maybe one or two to nothing because I knew who we were throwing and usually every guy they have pounds the strike zone. I figured it would be quick but not like that.”

“ On a cold night like tonight I thought my fastball was big. I needed that one. Pitching in these conditions is tough but I battled through it and worked ahead in the count. Coming down here we knew they were a tough team and they have a good program. They are one the better teams in the 16th region. They beat Huntington already this year who we came back and beat. They also beat Paintsville who we lost to just last week. We knew it would be a challenge on the road and our mindset was focused on coming down here and getting the victory.”

“ Our coaches have said all year that we have something special here and I love this team. We are closer than any team I have ever been on. It’s like family and I knew once we got rolling it was over.”