Lawrence County Tourism Board March Meeting is Full of Events 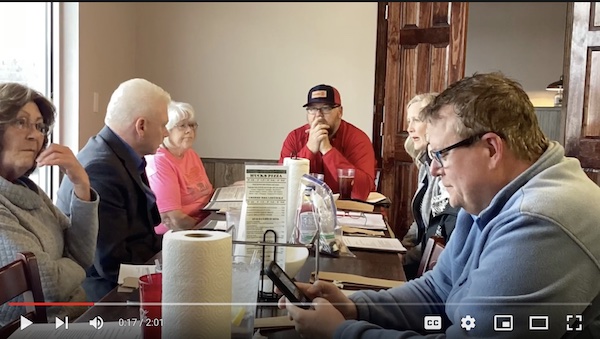 On Tuesday March 29, 2022 at 5:30PM the Lawrence County Tourism Commission had its regular scheduled meeting at Huckleberry’s Restaurant in Louisa. The following were in attendance Wes Kingsmore Chairman, Brenda Hardwick Treasurer, Susie Chambers Secretary and members Chris Jobe, Rita Parker and Keith Chaffin. Tamera New is a volunteer for the group. Wes Kingsmore introduced guests Harold Slone Mayor of Louisa, Vince Doty Deputy-Judge and Chaswade (Chas) Moran. All are pictured in the short video above.

(Kingsmore stated that a Special Meeting will be called for Treasurer’s Report and budget updates which has not been reported for past 2 years, he said.)

1. Trail Authority Committee– Will be marking trails with help of Greg Delong and Gary Setser and Amy Wallace Whelan. Motion by Chis Jobe and 2nd by Brenda Hardwick.
2. Easter Parade Sponsorship – Float Prize money $225, Motion by Keith Chaffin and 2nd by Rita Parker. First place wins $100, Second $75 and Third $50.
3. Noah Thompson – Tourism will donate $1,000 towards the sale of Noah Thompson, Protect the Accent t-shirts signed by Noah Thompson on American Idol.
4. Trash Cleanup– May 7, 2022 Tourism will donate up to $500.
5. Community Involvment from Blaine/Fallsburg/Webbville
6. EK railroad turntable exhibit-(Webbville) Tourism discussed fixing the railroad car with a display.
7. Website Grant Report-Vince Doty helped Tourism Board with receiving grant of $8,399. The first bid was $16,000 which was denied, second bid was $9,000 which was approved. Tourism will pay difference $601.
8. Bicentennial Progress-Keith Chaffin, Date will be July 1, 2022 on Friday Night.
9. Wildlands Magazine Article – The article on Lawrence, Johnson and Magoffin Counties featured the whole region. Kingsmore noted that Lawrence County was completely left out of this article. Kingsmore called Wildlands Magazine and explained the situation and asked to have Septemberfest featured for our county.
10. Cratis Williams Recognition – “Mr. Appalachia” was a scholar and folklorist in the Blaine, Kentucky area. Tourism discussed how to recognize Mr. Williams.
11. Walk path to Lock/Beach Cleanup Day – Tourism wants to update this Trail. Steps to Walk-Path from locks to beach. Cost of $1,000.
12. Cleanup Day Sponsorship for County PRIDE
13. Meeting Location for May Meeting-Lawrence County Public Library Meeting Room.

Chaswade Moran spoke about the planned ‘Cruise In’ in Louisa.  He explained that Small admission/donations will cover expenses, the rest will go to City Police Department, Sheriff’s Department, Louisa Fire, Fallsburg Fire and Blaine Fire departments.

Chas said the difference between a Car Show and a Cruise-In is Car Show has trophies, judges, competition and possible hurt feelings. The Cruise-In is Family oriented, fun, more returning cruisers. They have Car Show for Big Wheels, Go Karts and Bicycles. All participants get a small trophy which helps draw in families as a whole. Chas will set location to meet and routes to cruise monthly. The second Saturday of each month and will start April 30. This will run from April to October and Chaswade Moran will be Organizer.

Before closing Wes Kingsmore Chairman, stated that “He wants to leave a legacy behind for our grandchildren in Lawrence County”.

The next meeting for the Tourism Board will be in April. There are a lot of plans being made and Events to Attend in the meantime..