The final day of the 2022 Regular Session of the Kentucky General Assembly is on the horizon, which means legislative activity is taking place at a rapid pace. We are required by the Constitution to be finished by April 15th.  Week 12 of this year’s session included busy committee agendas and important legislation making final passage through the legislative process. 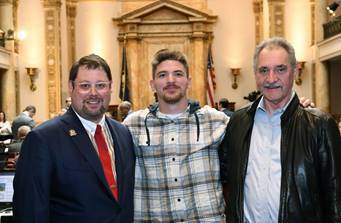 This week I had the distinct honor of recognizing the Kentucky Associated Press’ “Mr. Football” Isaac Dixon and legendary Belfry Pirates Coach Philip Haywood on the floor of the Senate Chambers.  Isaac was able to reclassify to the 2022 class under state Senate Bill 128 sponsored by my colleague Senator Max Wise of Campbellsville, which allowed students like Isaac to retake or take supplemental courses because of prolonged remote learning and other barriers caused by the pandemic.  This past academic year Isaac returned to Belfry High School to rush for nearly 2,000 yards and lead the young Pirates back from a 0-5 start to the Class 3A state championship.

Belfry High School Pirates football coach Philip Haywood is Kentucky High School Football’s “winningest coach.”  Coach Haywood has not only distinguished himself as a legend of the football field, he is also a noted author and has been a mentor for countless young men throughout Eastern Kentucky.  Coach Haywood’s deep Christian faith and dedication to educational and athletic advancement has made him a legend not only in Eastern Kentucky but also nationally as National Coach of the Year by the National High School Athletics Association.

At this point in the 2022 session 22 bills have been signed into law or have been filed with the Secretary of State’s office for enactment. Approximately 30 bills are with the governor for consideration; a number of other bills are nearly at the governor’s desk.

The Senate was able to finally pass a number of bills that were modified by the state House of Representatives, including priority legislation, Senate Bill 1, Senate Bill 9, as well as Senate Bill 83.

Senate Bill 1 assures that curriculum development and accountability with superintendents and ultimately to elected school boards which hire them. The bill gives parents a greater voice and choice in their children’s education because school board members are elected by residents of their district. Added onto the bill was the language of Senate Bill 138, the Teaching American Principles Act, which aligns history curriculum standards in middle and high school with those already present in elementary school history education.  I cannot overstate the importance of this legislation to help young people to understand and appreciate the great history of this country.

Senate Bill 9 systematically improves the teaching of reading to students by providing support and individual instruction across the state for grades K-3. Senate Bill 9 sets the goal for each student to be reading at or above grade level by the end of the third grade, which would set an achievable and crucial goal.  Students who can’t read have trouble in every area of education.  The bill also provides for more helpful professional development to teachers. The objective of the bill is to target reading instruction to those falling behind, and setting a foundation so every child in the district is on the same path.

Senate Bill 83 is the “Fairness in Women’s’ Sports Act,” which determines eligibility to participate in grades 6-12 and postsecondary education athletic activity or sport determined by a student’s biological sex. It protects women’s sports by ensuring fairness and eliminates the competitive edge a biological male may have over a female.

Senate Bill 1, Senate Bill 9, and Senate Bill 83 along with many other bills achieved final passage this week and are now on their way to the governor’s desk where they may be signed into law, vetoed or allowed to become law without his signature.

These bills and others were returned to the Senate with changes passed by the House.  The House asks the Senate to “concur,”, or agree to their changes. We often do so, and did in these three bills.  On the occasions we do not agree, those bills go into a “conference committee” where a final language is hammered out by members of each chamber.

The most notable example of a conference committee is the two-year state budget bill. Both the House and the Senate have made their respective priorities for the budget clear. Significant provisions of the Senate’s proposal were outlined in my previous legislative update. Budget negotiations are nearing their end, and you can expect a final product to be announced in the week ahead.  While the final budget is always a compromise on individual line items, the end goal is to provide for a great education, safe communities, and high quality of life for every Kentuckian.

The governor has vetoed several bills and the House and Senate have begun to override them. Most notably was the governor’s veto of Senate Joint Resolution 150. Upon the override of his veto, the state of emergency in Kentucky effectively ended on Tuesday, March 22. Following an unprecedented two-year-long state of emergency declaration, the enactment of Senate Joint Resolution 150 is a symbolic, yet strong, message to Kentucky residents that the emergency is over, and life as normal should quickly return to the Commonwealth.

While we have worked hard and accomplished much since January, there is still a great amount left to do in these last few days.  Please feel free to contact me at any time during or after the session if you are interested in any issue, or if I may be of any service to you in Frankfort or at home.

With the passage of more and more legislation in the waning days of the 2022 session, there are sure to be more vetoes issued by the governor. The session will soon enter what is known as the “veto period” to give the governor time to consider the bills passed by the legislature. The final days of session will be reserved for the legislature’s consideration to override such vetoes.

Senate Bill 40 passed out of the chamber and is moving to the House of Representatives this week.  Senate Bill 40 declares the fundamental rights of parents to make decisions regarding the education of their children. The bill provides that those rights cannot be restricted unless there is evidence the restriction is essential to furthering a compelling government interest; the law is narrowly tailored to further that compelling interest. The bill applies to government actions relating to children versus the parents.

In closing, I want to recognize two of the members of the Senate who will be retiring when this session concludes. They include a staple of the legislature since 2003, C. B. Embry, Jr., who epitomizes public service and Wil Schroder, who will likely be back after devoting his full attention to his wife and precious young children.

Both of these fine people are being honored with Senate resolutions accompanied by emotional testimony and stories from their colleagues in the Senate. I’m grateful for having the opportunity to serve with both and they will be deeply missed.