GROWING UP IN LOUISA: People I Remember

I suppose every little town has its characters. Watching Mayberry, or Andy Griffith, we see a whole lot of people, all of them characters. Whether we’re watching Gomer, or Goober, Floyd, Barney, Andy himself, or Mr. Darling, they are people not too unlike folks we’ve seen somewhere before. That isn’t saying that they are being played to make fun of the less sophisticated, but rather that they have characteristics that are part of each of us. I first learned, at the feet of my mother about different characters, all of them important and deserving respect.  In fact, over time I learned to look forward to meeting each new person around the little town. Knowing them would give me insight to how they ‘tick,’ and how others I would meet later, would feel or behave.

We remember the bigger than life characters like Bascom Boyd and Bill Cheek. I have written stories about our dear friends, Harry Richard Cyrus, Eddie Boggs, Johnny Justice, and others. I remember Pat Brown and his famous knuckleball. There was a black man we called Lightning who was an outstanding pitcher. I remember Pea Wee, Ern Compton, Kay Varney Maynard (our class clown), Joan Carol and Betty Hager Mead, Johnny Justice, my best friends Johnny Bill Boggs and Billy Elkins. I remember both Rev. Buskirk and Rev Perry, our preachers and Ed and Glen Bradley who ran some grocery stores. I’ve written about Frank Webster, and Sheriff Jake Jordan, as well as many others. I remember Sheepy Queen and Bill Keaton, and the man who sold pencils on Madison. I remember Carl Perkins, Doc Skaggs, Francis Cain, and Ed Land. So many people made up our little town. Each, in their own way had an effect in our lives. I enjoyed and benefitted knowing them.

I recall going to Riverview Hospital regularly (21 days) to get rabies shots when a dog I was barely associated with was pronounced by the health department to have been infected with the deadly disease. Each trip down to the river, I had the privilege to suffer at the hands of Nurse Logan. The trauma of being

stuck made me shutter at even the mention of her name. Even so, when I was home for a week-end or so, enjoying a respite from the Air Force, I developed a boil. Now boils are not fun things. I have no idea what brings them on, but I really don’t want to do it again. This mature, hot, painful volcano arose on one of the cheeks of my derriere, which to a young man of my tender years was painful in many ways. Finally, I could not stand it further, knowing I had a long train trip back to Virginia in front of me. I couldn’t sit, so this would have been rough, indeed.

There was nothing left but to swallow my pride and have it seen by a doctor. Walking in at Riverview, trembling that I might meet the monster I had long ago formulated in my mind, I remembered the saying that “pride goes before a fall.” Since this was reputed to be from the Holy Scriptures, I shuttered at how great the fall surely must be. Of course, the word was out once I entered those front doors. I was shuttled into an 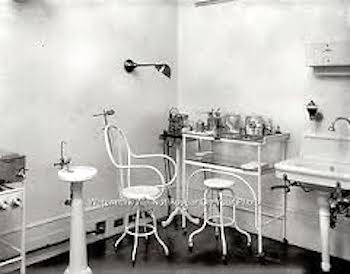 examining room filled with all kinds of instruments of torture. Then it happened. In walked Nurse Logan.

Now this lady was all about business. If she had a sense of humor, she certainly hid it well. Worse than a drill sergeant, she directed me to drop my drawers and lean over the examining table. Being trained by the military to respond to director orders, the pants hit the floor and my bare butt shown for what was to follow. I remember that she took a kidney shaped, white enameled pan, and sat it on the gurney next to me, and said something like, “this has to be lanced.”

I didn’t have a medical background so the term only brought up pictures of a knight being impaled through his armor. It instantly came back to me that my only armor was around my ankles. It was time for prayer. She explained what she was doing and even warned me when it was likely to hurt. As she removed the swollen head of the thing, she then reached in with something I think she called forceps, a kind of needle-noised pliers, and grabbed the ‘core.’ Then it hurt. Out came a long, stringy kind of a thing that seemed several feet long, which she was pleased to drop in front of me in the kidney shaped pan. Pointing to the object, once removed, she took pride that she’d gotten it all. There was some ‘puss’ yet to extract, and a bandage to apply. She gave me a warning that the site of injury should be kept clean. She told me that I would be well within a couple of days, but considering the size of the thing, would likely carry a scar. She was right. In fact, if I could bend enough I could find the spot even today. In the end, (no pun intended) Nurse Logan was kinder to me than I expected. Oh, there were no jokes and the bedside manner was that of the aforementioned drill sergeant, but there’s something to be said for efficiency. Was she a character? Oh, to be sure. To me, she was.

All around us, to the right, and to the left, there are people who ought not be looked through, but rather, enjoyed. Granted, not everyone will be to one’s liking, but they are the spices that make up a great soup that was our little town. I can’t imagine the void in our lives without these people who helped us grow up in Louisa.