Week 11 of the 2022 regular session was unique in that the General Assembly gaveled in for a historical day of session at the Old State Capitol. If you have never toured there, I highly recommend you go. The Old Kentucky State Capitol was the third statehouse, built in 1830 following devastating fires in the previous two. It was designed by native architect Gideon Shryock in the classical Greek Revival style, modeled after the Temple of Minerva and used until 1910 when the current Capitol was built.  It is a beautiful building, steeped in history and rich with artifacts of days gone by.

Used during the Civil War, it was restored in the style of that era and replenished with historical relics of that time. Upon renovation in 1920, when the Kentucky Historical Society moved into the building, the Senate chamber was furnished with 1830s replica desks and chairs after discovering descriptions in the 1830 Senate Journal. Original to the building are the enormous iron 1840s era chandeliers and the hand-blown stained glass window panes. Walking in through the massive doors and into the marble rotunda is truly awe-inspiring; it’s astounding to believe that the commonwealth is home to such a beautiful structure.

The Old State Capitol was home to some of Kentucky’s richest political history, including prominent speeches by Henry Clay, Isaac Shelby and Thomas Metcalfe. It was also witness to the assassination of governor-elect William Goebels in 1899, which a plaque now marks.

The Senate experienced a bit of this history on Tuesday, when stories were told and history recounted through ruminations and floor speeches. Sen. Donald Douglas (R-Nicholasville) gave a moving speech about the symbolism of being an African American man elected to office and having the opportunity to stand and give a floor speech in a historic structure previously built by slaves. Senators Brandon Smith (R-London), Jimmy Higdon (R-Lebanon) and Phillip Wheeler (R-Pikeville) stood and spoke about historical figures either from their districts or families who had traveled to The Old Capitol for political business back in their day. It was a memorable day, not only fun but fascinating for those who love both state politics and history. 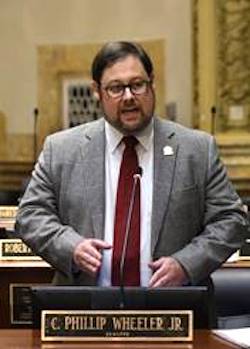 Three Senate bills landed on the Governor’s desk and were signed into law this week.

Senate Bill 64 was sponsored by Senate Majority Whip Mike Wilson and allows any public agency to establish a peer support counseling program for Kentucky’s public safety officers who have faced a traumatic, emotional or difficult incident while on duty.

Senate Bill 140, sponsored by Sen. Max Wise (R-Campbellsville) will make it possible for patients to take the specific medication their doctor prescribed instead of having to start with the generic medicine insurance companies prefer.

Senate Bill 265, sponsored by Sen. David Givens (R-Greenburg), replaces the board of trustees at the beleaguered Kentucky State University. This vital post-secondary institution is requesting $23 million to pay past due bills as a result of fiscal mismanagement. SB 265 is the first step to address KSU’s issues, as the legislature considers the changes and funding necessary to keep the historically black college solvent. Both chambers approved the bill and it has been delivered to the Governor for signature.

In addition to the excitement of Old Capitol Day, the General Assembly began negotiations over the biennial state budget this week. Every two years, both the House and Senate pass a budget for the following two years, a process in both procedure and tradition. At the conclusion of each day, the leadership of each chamber, budget chairmen and select caucus members came together in a conference committee to negotiate what will become the state’s budget. The first conference committee kicked off Wednesday evening and the second one was Thursday. These hearings are broadcast live on KET each day and can be viewed by all residents.

This legislation will update the definition of an “orphan well” to include any oil or gas well which has been determined by the Energy and Environment Cabinet to be abandoned or improperly closed, and that all owners or operators with legal responsibility for the well are determined to be financially insolvent after the cabinet conducts a reasonable investigation. Doing so will ensure that Kentucky receives that maximum funding from these grants.

One of the main features of this bill will require that contracts awarded for the “orphan well” remediation be capped at 25 wells per contract. By doing so, this will allow for small contractors, vendors, and companies in the region to make competitive bids, creating much needed jobs and boosting the economy in the region.

SB 321 represents an incremental change in how and when an abortion can occur. Sponsored by Senator Wise from District 16, while it does not completely abolish abortions in Kentucky, it is one step closer to a day that thousands of Kentucky children will be saved from premature deaths.

Even as we celebrated Kentucky’s fascinating past, we looked into the future as the Senate passed legislation throughSB 347 to do our part in the national roll-out of electric motor vehicle charging stations.  With HB 392 we set up state regulation of so-called “solar farms” including where large solar electric generation fields could be located, and ways to assure the land under them is returned to good use when they are decommissioned after about 20 years of operation.

We also spent a lot of time promoting trade workers this week with HB 192, which helps folks employed in electrical installation and elevator repair, Heating and Air in HB 249, and certain hair blow-drying services through SB 113. Also affecting many Kentuckians was legislation relating to hunter education in SB 241.

On family related issues, we passed SB 95 to help women dealing with postpartum depression. We also increased penalties on those who commit crimes against children under 12 years of age, and required law enforcement to collect data relating to domestic violence so we can address that scourge in a more informed way with SB 271.

2022 ELK DRAW SATURDAY, MAY 14 TO CELEBRATE 25TH ANNIVERSARY OF RESTORATION OF ELK PROGRAM