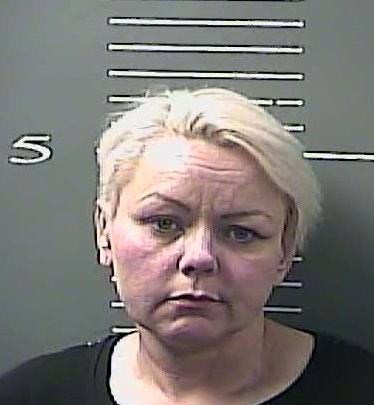 PAMELA J, STILTNER, 43, OF LOUISA, WHO WAS ARRESTED ON ST. PATRICK’S DAY AFTER FLEEING FROM POLICE VIA VEHICLE & ON FOOT, DUE TO BEING WANTED ON AN OUT OF COUNTY WARRANT.

A Louisa woman who was wanted on bench warrant from a bordering county, has found herself in deeper criminal legal trouble than she was originally in, when she led police on a vehicle and foot chase pursuit before she was finally caught

But one woman found herself facing additional charges in an unlucky Irish manner on St. Patrick Day evening.

A Lawrence County deputy spotted Pamela J. Stiltner, 43, of Louisa driving along Blaine Creek Road and knew that she was wanted in Boyd County on a warrant for not appearing in court on DUi, meth possession, possessing drug paraphernalia, and careless driving; so the deputy tried to pull her over.

The car that Pamela Stiltner was driving accelerated instead, leading the deputy on a chase into and through Louisa, until Pamela Stiltner suddenly swerved into a driveway where a 6-year-old was playing nearby.

Officers say Pamela Stiltner then ran behind nearby homes, allegedly looking for someone to hide her. Pamela Stiltner was arrested after one resident told her she needed to leave. Ms.Stiltner was finally apprehended and taken into custody by officer Jeffery Chase Kirk, of the Louisa Police Department.

In addition to the original Boyd County warrant, Pamela Stiltner is now facing seven (7) new charges, which consists of the following:

Pamela Stiltner was transported to and lodged in the Big Sandy Regional Detention Center in Paintsville, KY., in Johnson County; where she is currently being held.