GROWING UP IN LOUISA: Gumming it Up!

I remember times back in grade school when teachers always got after us when they saw us chewing gum. I think it was partially for self-preservation and partially because of the picture of a large herd of cows (students) with jaws moving constantly in less than an attractive manner, not to mention the sounds of smacks and pops from the overcrowded classroom. Today, we’d likely think the ill-effects of taking up the habit is minor when compared to the pleasure and calming effects such a practice brings, but I remember worse issues. How many of us, especially in those days, accidentally stepped on a wad of gum, only to find our shoes glued to the surface? Certainly, to onlookers the actions of those trying to free their sticky shoes must have been hilarious, but to the victim, it was a reason to search for just the right forbidden words that in themselves could put a kid in a lot of trouble. I remember trying to work the gummy mess from a shoe bottom with a stick. Not only did the glob stick to my hands, but also in my hair and even on my bicycle pedals and/or handle-bars. Yuck! 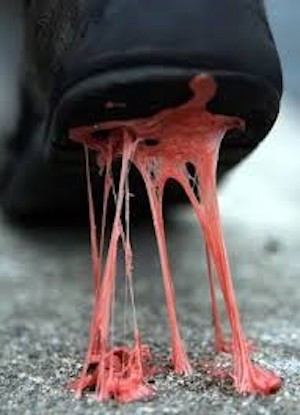 In the early days most of us knew how to rid ourselves of the unwanted or totally worn-out, flavorless wads by secretly sticking it to the underneath side of a desk or chair. I recall throughout my schooling years of seeing many desks with layers of dried, hard gum. I presume some of it was to avoid a teacher confiscating the contraband. This seemed a far better solution than those evil kids that would avoid trashcans and simply send a mouthful toward some bushes or tall grasses. It would then lie there ready to bush-whack the next person who innocently traveled in that direction. As we got older we learned to use a piece of paper to catch the remnants and provide a safe solution when we dropped it into the trash.

Since a major ingredient of the product was sugar, kids craved the stuff. Thus the sugar made them more and more hyper. Dentists howled, as healthy mouths grew cavities in their teeth. Talk about a conflict of interest!

After Googling the history of gum I learned more than I expected. While the practice of chewing the rubbery substance goes back to prehistoric times, the commercialization of gum began perhaps a little more than a hundred years ago. What’s really amazing is that it was first handed out as a premium for those buying baking soda or some other such product. It turned out that the added premium was liked more than the original product, so gum developed into a large empire itself. Conversely, one emerging gum company started including pictures of sports hero’s with their gum and found that the sports cards were liked better than the gum. Frankly, it was awful stuff, so most kids just threw that cheap gum away and just collected the cards.

I remember that sometime, likely before I went to grade school, my mom would buy me some ‘Chicklets’ from a vending machine at the train depot. Drug stores had similar machines displayed and the grocery stores around town had different brands of chewing gum and bubble gum at their candy counter. Soon, gum could be found nearly everywhere. 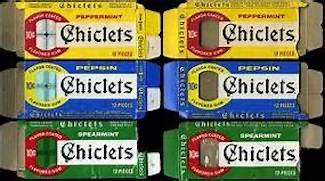 Far off in Chicago the leading gum maker of the day at the turn of the century, Wrigley’s produced spearmint gum. During WWII they introduced a product called Orbit. This one allowed Wrigley to give their regular gum to those soldiers and sailors involved in the war effort. Of course, part of the reason was that there was a limited supply of raw materials during the war, and Mr. Wrigley did not want to change his recipe. After the war he again produced the spearmint gum, Juicy Fruit, and added ‘Double-mint’ to the mix. I remember a commercial of our day that featured twins. The idea was to sell the idea of “Double-mint, Double the Flavor, Double the fun.” Want to see it again? http://www.youtube.com/watch?v=PHfjdxN1URI

I always thought the main difference in chewing gum and bubble-gum was the elasticity of the chewed product that allowed one to blow the substance into bubbles. I was never able to get chewing gum to work in that way, but never gave up trying. I chewed a big wad trying to break it in, sometimes for what seemed to be forever. Finally, on some days it would work, but such work was hard and my jaw grew tired. A favorite back then was “Bazooka” bubble gum. It made a larger wad and was ideal for decorating the underside of furniture.

A neat thing about blowing bubbles was all the fun of dealing with the after results. First of all, we tended to use more than one piece, which made for a problem getting rid of it later. But first, let’s look at the times we had a really big wad of bubble gum. We’d chew and work it until finally it was all broken down, soft as bread dough, and then we’d start stretching it by pushing our tongue against it while we tried to hold it safely between our teeth. More than one kid would blow it out of their mouth sending it halfway across the room. 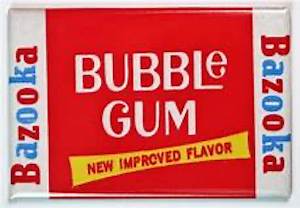 Usually they avoided hitting others, but pretty much ruining the gum. Once on the ground it tended to attract dirt, sand, pine needles, leaves and if you were really unlucky, a bug.

It was time for another try with some fresh gum. Finally, after working the wad for an eternity we were able to start a bubble. It was reasonable that if one or two pieces made a nice bubble, then several pieces would make a ‘big’ bubble. Those were the ‘more is better’ days. Alas, every successful bubble has its day. That’s right. It would burst. In the deflating process, a used bubble involved the brainless and inconsiderate taking of unreasonable risk. It could create a rubbery mask for the host as gum would cover their face. At first, this was a nuisance but we soon learned to accept this. We became more skilled at retracting the gum with a flick of our tongues. Some weren’t so skilled. I remember a kid who got the huge bubble mask all over their face, hair and eye glasses. It took some time to clean up the mess and the gum was well contaminated and had to be retired.

Then, there was the kid that stretched the gum out in a thin string and folded it back on itself, as if it were a yoyo string. Talented kids could have multiple strings going and make interesting designs looking like bow ties. This practice led to sticky fingers. Sticky fingers attract dirt. Nuff said.

Now, that puts one back to the problem of how to rid ourselves of the unwanted bundle. Keeping the used wrappers, some of us had the solution right in our pockets. Others? Well, maybe not. They’d simply remember where they spit it out and stay away from there for a suitable time. The rest of the population needed to beware, too. The larger wads could be put into a sling shot and sent in a suitable direction, or placed carefully under mom’s favorite coffee table for a potential revisit should supplies dwindle, or as the song goes, on a bedpost overnight.

For gum users that had rotted their teeth out, a new product was introduced that would allow for continuation of the habit. Trident, or any of those with ‘dent’ in the word was a clue that it wouldn’t stick to dentures. Anyone having a partial or full denture would understand that chewing gum that was not the right kind could develop a form of ‘lock-jaw.’  After all, it is so embarrassing to take your teeth out and clean them with a stick. Cleaning shoes is easier. 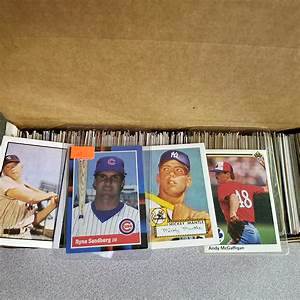 I remember ‘Clove,’ ‘Beeman’s,’  ‘Black Jack,’ ‘Double-Bubble,’ ‘Beech-nut’ and the others previously mentioned. The king of gums has to be the Wrigley bunch in Chicago. I know from their website that they are generous in support of a number of programs through their foundation. This includes a program to teach and help with oral hygiene. Haw! Can you have it both ways?