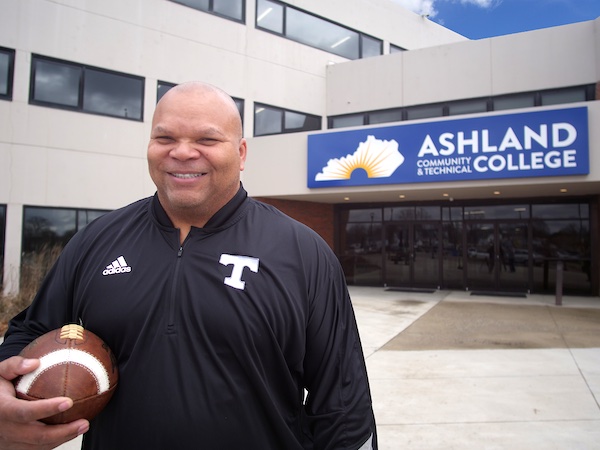 ASHLAND, Ky. – When the name Al Baker is mentioned in sports circles, his football career at Trigg County and the University of Kentucky always come up.

Deservingly so, as he will be inducted in this year’s KHSAA Hall of Fame for his standout football and track performances during his high school career.

However, when the name Al Baker is mentioned in the halls of Ashland Community and Technical College, it is for his commitment to the underrepresented minority students of eastern Kentucky.

Baker says his time on the field is one way he is able to connect with students, because the lessons he learned as a football player translate to the same lessons ACTC students can use in the classroom.

“When things don’t go the way you plan, you don’t just quit. You keep trying and do better next time,” he said. “Put one foot forward and just keep moving, because as soon as you stop, that’s when all of your problems can start.”

With a population of just over 10,000 at the time Baker graduated from high school in 1986, Trigg County is where Baker’s football career took off. He says he has his hometown to thank for that.

“My community was always supportive of me, and that is kind of what kept me going,” he said. “My teachers and coaches surrounded me with love. They saw some talent I had, and before you know it, I was doing what I had to do to make it to the next level.”

Baker says his latest honor is for all of Trigg County.

“This recognition reflects Cadiz and Trigg County. The people there are who molded me into who I am now and invested a lot in me,” he said.

His achievements don’t just stop at football, however. He also won several state championships in track and weightlifting.

He went on to play football at the University of Kentucky, before being drafted by the New York Jets in the tenth round of the 1991 draft. However, he chose to not pursue his professional football career, due to injuries he had sustained during college.

Baker was one of eleven children and his father taught math for over thirty years. He says his father put a large value on education, which is what kept his mind on earning a diploma just as much as racking up stats on the field. Baker earned a Bachelor’s of Arts degree in Communication from UK in 1991.

After graduating, he worked as a social worker for the Department of Community Based Services for around seven years.

From there, he worked as a probation officer for a year, before beginning his career at ACTC. Shortly after being hired at the college, he earned his Masters of Arts in Communication in 2008 from Morehead State.

Baker has worked at ACTC for fifteen years and currently serves as the Director of Cultural Diversity. Baker is also the current President of the Boyd/Greenup chapter of the NAACP.

“I have always liked working with young people and building relationships. Trying to recruit students to go to college is right up my alley. I feel like I can relate to a lot of students, especially through sports,” Baker said.

“I want our students to realize that the size of the town they come from doesn’t matter. It’s what you make of it,” he added. “Most of the kids around here are all from small towns, and they wonder if they can make it. I came from a small town too, but I figured out that it was what I made of it.”

TRIO OF BASEBALL DAWGS SIGN ON THE DOTTED LINE