GROWING UP IN LOUISA: Corn-Cob Pipes!

During my childhood I accepted the claims published in cartoons that Eastern Kentucky was full of iconic images of a stereotype hillbilly. After all, I saw some people that could have been models for the Beverly Hillbilly TV programs. I watched that weekly program with Jed Clampet, et al., as well as Green Acres, all from Hooterville. It wasn’t until I was older that I began to see representing our citizens like that was an insult. Our people may be backward in their particular standard of living, but they are smart, goodhearted folk who love their fellow man. Whether we are talking bib overalls, feed-sack dresses, or “Hee Haw” kinds of corny jokes, I became less tolerant of the put-down of some very good people. The entertainment industry focused, it seemed, on uneducated moonshiners and dirt-poor farmers or miners. In truth, I thought the people I knew that may have fit the published images were far short on understanding the wit/wisdom of this ‘class’ of people. In my time I came to know some very talented people in many ways. Good old Louisa High School graduated many professionals, including a Chief Justice of the United States who saw this nation through the war years. We had doctors, lawyers, well-known country stars, and engineers that built roads, bridges, dams, and refineries. We had merchants, preachers, school teachers, and soldiers who fought and died for our country. 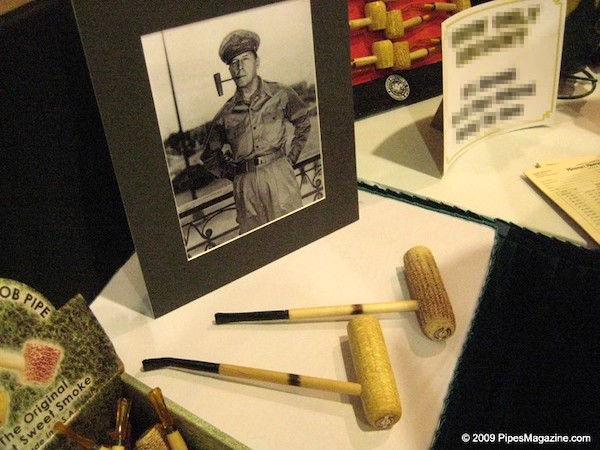 That said, if not preached, we also had our share of village personalities including some that were eccentric, or different. Others saw no offense in the characterizations but rather took pride of their mountain heritage. It is risky business to write about people whatever your intent because some will find it distasteful or even hateful. In this article I hope to tread lightly and respectfully. I mean no disrespect of anyone, but rather talk about my memories of growing up.

When I was a preschooler growing up on Clay Street, I wasn’t allowed off the block when playing or exploring the neighborhood. I will not ever forget the time, when one morning, I slipped two houses up Franklin to the little house that Ruick Smith had rented for his wife, Irene, and daughter, Jennie Lynn. (If I’ve misspelled their names, I’m sorry). The house had a front porch, as I recall and it was a short step for me to climb up to visit with the kids that were playing there. I joined the older kids but almost at once, I spotted a corn-cob pipe lying on the porch next to a pillar. As any young fellow of such tender years might do, I picked it up and sucked on it. After a few moments I was bored with that activity so I laid it back down. Upon doing so, a big black spider crawled out of the pipe’s bowl. When I saw it I screamed and ran home wondering how many spider eggs I had ingested. For most of my life after that, I was afraid of spiders. I would have preferred to have been more like Spiderman with some super powers, but alas, I didn’t. I seemed to have regressed into the opposite, ever fearful of the little creatures.

During this same time-frame a certain well-known General was as popular in America as could be imagined. A five-star, General of the Army, Douglas MacArthur, was famous. He always wore a fancy embroidered service hat and smoked a long-stemmed corn-cob pipe. This was during the controversial period when there was, unknown to me, a private war going on between the heroic general and President Harry Truman. Even as a youngster, I came to hear the topic of everyone’s conversation and the opposing opinions when finally the general retired. He didn’t exactly ‘fade away,’ but he dutifully played his role as only he could. Not far from where I now live there’s a memorial which is filled with artifacts and souvenirs from his illustrious career, including a long-stemmed corn cob pipe. His body lies under the cover of a large, carved memorial that all in the gallery may visit. 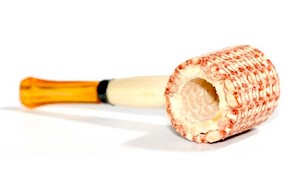 After getting a little older, I remember having a pipe that was similar, but with a shorter stem. Even though I looked, I never saw any of the MacArthur variety for sale. The one I had contained a filter in the stem that could be changed out after a smoke or two. As many during my day, I had taken up smoking when I was very young. I started off with a weed called life-everlasting, and then I switched to using whatever tobacco I could find. I remember the age old joke about whether an establishment carried Prince Albert in a can. Of course to those who cannot forget, and those deprived of knowing the answer that would quickly follow a positive response; “Well, let him out!” I think that Gile Simpson once told me he’d get as many as two or three of those silly calls a day over at his Gulf station.

As I grew older I had some nice briar pipes, one with leather fashioned over the bowl, another with carved meerschaum, but the best smoking one was my corn cob. I had kept from those early days, even after I had kicked the habit.

My wife’s grandmother, who died at the age of 101, was known for several things she did religiously up until the time of her death. Coming from West Virginia in an age when mountain top log cabins were a normal thing, she ran the house while her husband and children ran the farm. She told us stories of her arriving at the farm in a covered wagon and that it was weeks before the cabin was built. Later, she moved into town and lived in a regular house for much of the rest of her life, but she still got up, made fresh biscuits on her Hoosier cabinet, which she preferred over her own mother’s Hoosier that was relegated to the back porch. We ended up with the older of the two. It serves us still in our kitchen. It came complete with a flour bin and sifter, some recipes and fittings. Grandma often put on a pot of beans, to be eaten later, before she went to her favorite rocker and took out the ‘Good Book.’ Bible verses were her mainstay and were a life-long habit. While rocking and reading she lit her ‘corn –cob’ pipe and had a smoke.

It was a bit unusual in my day to see a lady smoking a pipe but it was common in the decades preceding the craze for factory made cigarettes. We usually consider a pipe to be a man’s implement, but she and many other ‘mountain women’ didn’t let that daunt them in this practice. I had seen a few of these around the court house and during visits to country homes when I was young and impressionable, so I was not surprised when I first saw this granny figure enjoying a bowl of homegrown tobacco tamped down in her corncob pipe. Yep, a pipe full of tobacco, a rocking chair, and her Bible, were first on her list. That’s how I remember her.

Putting her Bible down one day she related to Susan and me a story about her late husband. Seems she had a dog that had been hurting her egg sales by getting in the hen house and sucking eggs. She told her husband about it and suggested that they may have to get rid of the dog. He said he could cure the dog of the habit. He took a slice of bread and borrowed the old corn cob pipe. Taking the pipe apart at the stem, he smeared the nicotine/tar residue onto the bread and fed it to the dog. The next day Granny told her husband that the dog had died. “I told you I would cure her from sucking eggs,” he exclaimed with a twinkle in his eye.

Believing the tale to be true, I wondered what products were in my pipe stems, so close to my mouth. That thought didn’t stop me, but it did encourage me to clean them more regularly. It was after that when I quit tobacco altogether, but for entirely different reasons. Undoubtedly, there will be an upheaval of remarks about animal cruelty among the readers, but please keep in mind that this was during another era, and in a time when ‘egg money’ was often what kept families going.

I think the main reason that corn-cob pipes smoked so cool was that they were many times more porous than briar or even meerschaum. I never smoked the one pipe that is supposed to be best. That would be the very one made famous by Sherlock Holmes, himself; the Calabash. This pipe is made from a South American gourd and is lined with meerschaum. It has that identifiable crook that detectives the world over relish as they imitate the ‘world’s greatest detective.’ Jane Marpel, or Hercule Poirot, notwithstanding, of course.

I have one or two tales about jugs and moonshine, but I’ll save them for another day. It seems my pipe is gone, I no longer play a banjo, and my coveralls do not fit. Nonetheless, I still have some country in me. Pass the gravy, please.