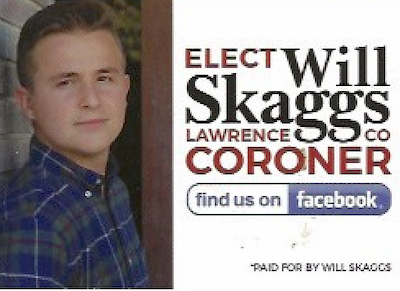 LOUISA — The upcoming May 2022 Primary election in Lawrence County has produced its first controversy.

A hearing is set for March 24 in Lawrence County Circuit Court in a lawsuit filed by Lawrence County Coroner Wesley Heston seeking to disqualify his opponent in the Republican primary election. Heston, who just changed to the GOP party after being a Democrat most of his life,  says in the suit that Will Skaggs doesn’t meet the constitutional qualifications for coroner.

Heston claims opponent Will Scaggs is not old enough to run for the office.

Scaggs reportedly is just shy of the 24 year-old age qualification according to Heston’s lawsuit.

Lawrence County judge/executive Phillip Carter, who has been in county government for two decades, said the rules on the age for coroners says 21 years of age but has been changed to 24 and then changed back in recent years and maybe back again. He said it was unclear what the law presently states.

“We are not responsible to check the eligibility of candidates when they sign up to run,” the deputy clerk said. “They have to make sure they are eligible.”