As we wrap up week nine of the 2022 Regular Session, much is happening in the world. Often we get caught up in challenges we face nationally and even those challenges abroad. Rightfully so. The current most critical topic is the conflict between Ukraine and Russia. Bipartisan Senate Resolution 153 was adopted by the Senate this week, and it spoke to the importance of freedom and standing in unity with the Ukrainian people.

The Commonwealth of Kentucky supports Ukrainian sovereignty and its right to self-determination, as we have a shared love of freedom and self-governance. America remains the shining city on a hill, and as proud Americans, we wish for nothing more than the same independence and love for liberty we share at home to be spread across the globe.

Since declaring independence from Russia in 1918 and being freed from the grip of the communist Soviet Union in 1991, Ukraine has developed a rich culture, language, and history, entirely unique to itself. After the fall of the Berlin Wall, Christianity was introduced to the nation and allowed to flourish. Senator Robby Mills (R-Henderson) shared a touching story on the Senate floor about his travels to Ukraine during that time.

Like Kentucky, Ukraine is geographically blessed and is rich with natural resources, which are the primary drivers of its economy. These national treasures are to be enjoyed by the Ukrainian people, not to be seized by an authoritarian Russia and used to expand its wealth and power. As a way Kentuckians can stand against Russia and for Ukrainian sovereignty, our robust spirits industry can cease selling and purchasing Russian vodka and other goods. This is a wonderful opportunity to shop local and support Kentucky and United States produced liquor products.

With Ukraine being the largest Eastern European country, its independence is in our country’s best national security interest, especially as Russia and China strive to become a global hegemony. We must stand for the values our republic best exemplifies and alongside the people of Ukraine against an aggressive, unpredictable, and dictatorial Russia. The balance between human prosperity and freedom and human suffering and subjugation is constantly shifting. Despite fears and anxieties of foreign unrest, Americans must continue to defend the principles that best enable us to live out the rights we are each endowed with.

Another bipartisan measure that passed the senate this week was Senate Bill 194, legislation set to send a rebate to all income tax-paying Kentuckians. This money is not a stimulus, but comes from a budget surplus resulting from an excess of federal money flowing into the state, as well as conservative spending over the past couple of years. These funds are currently sitting in the commonwealth’s coffers and are not tied to future projections. During a time of rapidly rising inflation, this bill puts hard-earned money back into the pockets of families and allows them to save or spend that money as best fits their needs.

Other bills passed this week include Senate Bill 10, legislation that bolsters the nursing profession in our state by the expansion of nursing school slots and expanding licensing reciprocity for with other states so that qualified nurses from outside of Kentucky can work here and meet our needs.

Other major legislation included House Bill 6, which sets the standard for car trade-in values and related property taxes. Since 2009, the state has used the “clean” trade-in value or vehicle assessments as opposed to the “average” trade-in value. This has resulted in the unfair inflation of motor vehicle taxes on citizens throughout the commonwealth. In addition, it directs Governor Beshear to utilize the 2021 values rather than the abnormal values for 2022 and 2023 that we are seeing as a result of the inflationary policies of the Biden Administration.

Finally, the Senate passed House Bill 144 and House Bill 4 which affect our state unemployment trust fund. I was able to support HB 144 which appropriated American Rescue Plan <image003.jpg>Funds to resupply our depleted Unemployment Trust Fund and get it back to pre-pandemic levels. 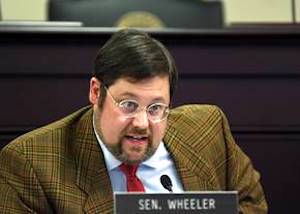 I was unable to support HB4 since I think it will be bad for Eastern Kentucky and the 31st Senate District. House Bill 4 substantially reduces the number of weeks of unemployment that a laid-off person is eligible for. In addition, it uses “indexing” to tie eligibility requirements to the state unemployment rate rather than the regional unemployment rate. Clearly, Eastern Kentucky and Western Kentucky have suffered far more in the last two decades than the “Golden Triangle” and places like Bowling Green where there are large factories, innumerable job opportunities, and a shortage of qualified labor. While this legislation may be well-intended to encourage people to re-enter the workforce at a time of shortages, I feel that it will unfairly force rural Kentuckians into substantially lower-paying jobs or, at worse worst, accelerate the depopulation of rural Kentucky that we have seen in the last two U.S. Censuses.

It’s an honor to serve as your senator. If you would like any additional information or have questions or comments, please contact my office at 502-564-8100.