GROWING UP IN LOUISA: I Remember

The Bible says that life is just a vapor; here today, gone tomorrow. That adage is true even when considering places and things that used to be. Take the old Louisa/Ft. Gay Bridge that once had a narrow two lanes and planks for the pedestrian. My mother walked that every day to catch a ride to her job in Huntington, WV. I 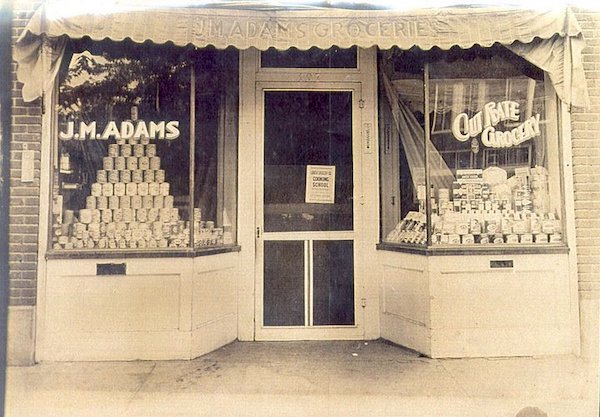 walked it, too, to get to the ballfield on days I had a game. I remember paying a three-cent toll (I think) when I reached the ‘point’ turnoff. It may have cost more depending on whether one was walking, or in a car. I often wondered about those times when money was lost in the making of change if coins dropped and fell through the grid. A metal detector might find some of that treasure if someone could search the area below.

When I was growing up the locks were inoperable. Even the dam itself was wide open, allowing the river to rush through the pillars that once had the function of blocking the flow. I have a copy of a movie from my mother’s time that showed it working, except that it was hard frozen. Young couples were skating as if a rink had been installed. There was no park and certainly no swimming pool in my day.

The grade school I attended was just before a steep rise on the Town Hill base, and well above the location of the newer school that was finished just before I graduated from the old high school.

The old Kentucky Normal College was a dominate structure rising above the newer building towering high with its bell tower. With three floors of classrooms that included a large assembly hall it was finally given some exterior fire escapes in fear of what might happen. With well-oiled wooden floors it was waiting for that sad day that could have happened. We had classes in many of the rooms in both buildings. Those years were a major investment of our time, even our lives. We learned a great deal in our lessons and had so many events 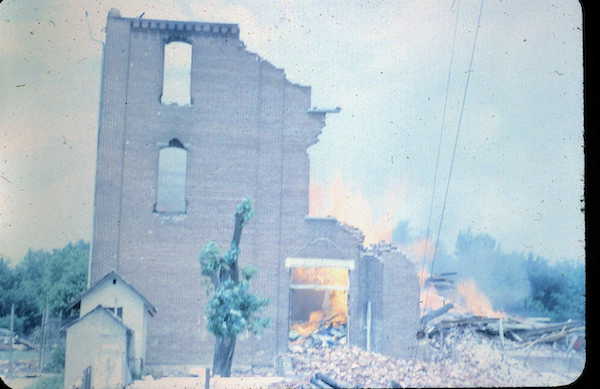 that we could never forget. We had various speakers including politicians, preachers, and others. We saw or played a part in performances held by the glee club, the wonderful band, and theater plays that the whole town enjoyed. In was on this stage that red and black jackets with the earned letters, were issued. Also, class rings and the Scarlack annuals were delivered. Football was played in the field behind the two buildings, and basketball games were in the gym in the new building. I have a few pictures of the last days of the old building as it was burned as part of demolition.

We cannot forget that fire also took out our old train depot and a good bit of the businesses by one catastrophic train/truck collision. Sadly, this cost a human life and the livelihood of a number of merchants. The scars of that day sadly remain. 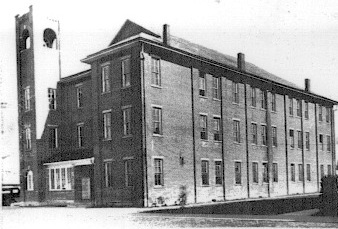 Many landmarks of my day are gone, such as the old Louisa Flower Mill and the World War Armory along the tracks. The ‘Corner Store,’ I often used as a cut-through from Madison to Main Cross is gone. The Methodist Church lost its congregation to a nice new place of worship on the ridge between Town Hill and Pine Hill.

Even the Mayo Trail moved ‘uphill’ on Madison when a bypass was built, only to be replaced by another bypass. Businesses all around have vanished, just like a vapor. But, there are those of us who remember. We are not necessarily opposed to change or growth, but we love the memories of that other time and know that in time they will die with us. Maybe that’s a little sad, but it is the way it is. I no longer have my band jacket or my class ring.

The town is different, but so am I. Even so, it’s okay to remember.