Langley, Ky. — For the third consecutive year the Lawrence Co. Bulldogs ( 25-7 ) are the 58th District champs after a thrilling 67-62 overtime victory over Floyd Central ( 20-9 ) Thursday night. 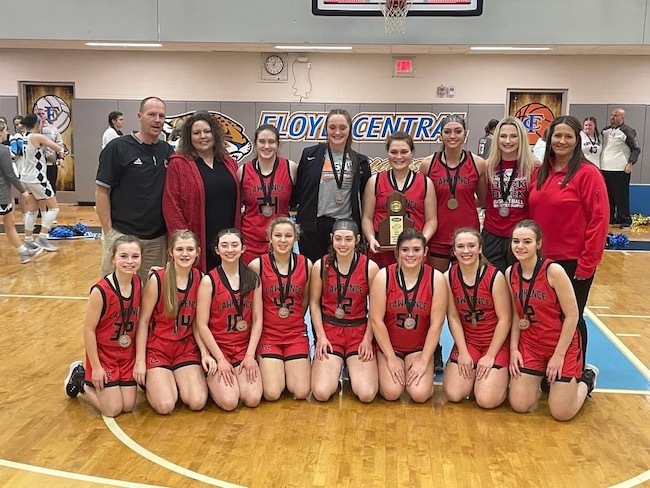 With the victory Lawrence Co. picked up win number 25 which is the most in school history. They had never won a District before winning the last three, all on the road at Floyd Central at Betsy Layne and at Prestonsburg.

The Bulldogs hit 5 three pointers and went 18 of 30 from the charity stripe.

The Jaguars hit 1 three pointer and went 13 of 23 from the charity stripe.

Both teams will advance to the 15th Region tournament next week at the Appalachian Wireless Arena.

The Dawgs will play either Shelby Valley, Paintsville or Pike Co. Central in the first round.

The Jaguars will play either Pikeville, Belfry or Martin Co. in the first round.

The draw will be at 2:00 Saturday afternoon in Pikeville.

“… I couldn’t be more proud of our kids. We were playing without Kaison Ward who got injured the previous night. We had a 12 point lead with under 3 minutes and made some poor decisions with the ball, didn’t take good shots and they forced us into overtime. In overtime we were finally able to close out the game correctly and pull out the win. Couldn’t be more proud of our girls. Three straight is pretty special. We’re going to enjoy this one and then get our game plan together and try to win three more next week.”