This Week at the State Capitol: Lawmakers hit the halfway mark, focus in on school bills 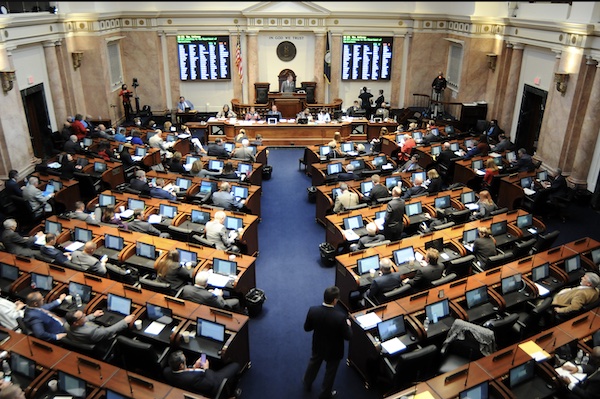 Lawmakers hit the halfway mark, focus in on school bills

FRANKFORT – The Kentucky General Assembly has passed the halfway mark in the 2022 legislative session, and while a handful of measures are now law, many of the most high-profile bills continue to work through the process.

Lawmakers hit day 30 of the 60-day session on Wednesday, and more than 900 bills and resolutions have been introduced in the House and Senate so far. Of those, more than 200 have passed at least one chamber of the legislature.

However, deadlines are looming, and Tuesday is the last day to request new bills from drafters. Legislators have until March 1 to file legislation in the House and until March 3 in the Senate, offering little more than week to wrap up any proposals for this year’s session.

Much of the work this week focused on issues affecting schools, including student safety, academic standards, masking and athletics.

Among the bills gaining steam was Senate Bill 138, which calls for public schools to teach a series of core concepts and historical documents that supporters say are central to understanding American principles and government.

Proponents said the bill is needed to address gaps in civics education and underscore the importance of key people and events in American history. Critics, however, said the measure could stifle much-needed discussions on social topics like race and gender.

SB 138 cleared the Senate Education Committee on Thursday and now heads to the full Senate.

Two other measures related to school athletics and transgender students— House Bill 23 and Senate Bill 83—were also generating debate this week as they moved forward in their respective chambers.

In essence, both measures would prevent male-to-female transgender students from participating in girls sports. HB 23 received approval in the House Education Committee on Tuesday, while SB 83 advanced off the Senate floor on Wednesday.

Supporters say the changes are necessary to provide a fair and level playing field in girls athletics. But opponents contend that the bills are unnecessary and would prevent transgender girls from reaping the social and health benefits of sports.

Other issues that lawmakers sought to address this week included:

Child abuse: House Bill 263, known as Kami’s Law, would increase the penalty for first-degree criminal abuse to a Class B felony if the victim is under 12 years old. It cleared the House floor with a unanimous vote Tuesday.

COVID-19 immunity: In the event of any state vaccination mandates, Senate Joint Resolution 80 would recognize natural immunity against COVID-19 as equivalent to being vaccinated. The measured received approval on the Senate floor Tuesday.

Gubernatorial pardons: Senate Bill 149 proposes changes to two sections of the state constitution that would prohibit the governor’s ability to grant pardons or reduce sentences around election time. It received approval Wednesday in the Senate State and Local Government Committee.

School police: Senate Bill 120 would authorize local boards of education to establish a police department for local school districts. It advanced out of the Senate Education Committee on Thursday.

School bus cameras: House Bill 221 would allow school districts to install stop-arm cameras on school buses. The cameras would help police track down traffic offenders who drive past buses while children are boarding or exiting. It passed off the House floor on Thursday.

Kentucky State University: House Bill 250 would allow the state to loan $23 million to Kentucky State University to help the struggling university meet its financial obligations for this fiscal year. HB 250 directs the Council on Postsecondary Education to create and oversee a management improvement plan and a loan repayment plan for KSU. The bill passed off the House floor on Thursday.

Lawmakers are scheduled to break for Presidents’ Day on Monday but will gavel back in on Tuesday for the 33rd day of the session.

Kentuckians have many ways to keep in touch with the legislative process, including the Legislative Record webpage, which allows users to review and track a bill’s progression through the chambers.

Citizens can also share their views on issues with lawmakers by calling the General Assembly’s toll-free message line at 1-800-372-7181.