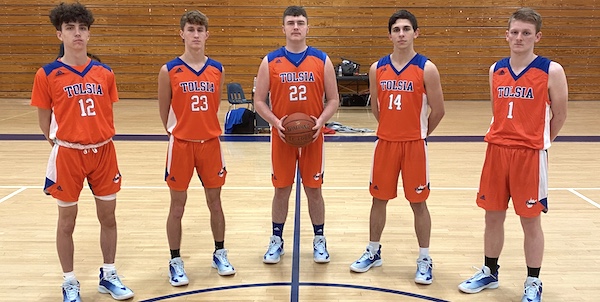 The Timberwolves beat the Rebels for the second time this season as Tolsia played at home for the final time this year.

Tolsia hit 4 three pointers and went 3 of 4 from the foul line.

The Timberwolves hit 7 three pointers and went 8 of 17 from the foul line.

The Rebels never could get anything going offensively against the Miners at home.

Tolsia went 5 of 11 from the foul line and hit 1 three pointer.

Tolsia hit 1 three pointer and went 12 of 22 from the charity stripe.

The Rebels will finish up regular season play with a trip to Mingo Central on Wednesday.

“… We haven’t been shooting well at all and we try and feed off of our defense and get easy baskets. Against Grace Christian, who is well coached by Dave Akers hit about 15 threes against us and a lot of those were contested. We had a hand up and they just knocked it down. We would get it close and they would make a run every time to spread it back out. Mingo Central is ranked 7 or 8 in Double A and have a bunch of size led by Jarius Jackson who is a great player, we held them to 55 points but couldn’t get it going offensively. Against Spring Valley the Hazelett kid wore us out. We had no answer for him. We played hard all three games and never quit. We play at Mingo Central next week and then we will start post-season play.”

“… What can you say about our seniors, so proud of this group and I would take them again next season. They have laid the foundation during my first season. CJ Johnson plays so hard and gives everything he has every night. Dylan Dawson is constant hustle all game long. Anthony Lovins has battled injuries all year long and hasn’t missed a game or a practice. People don’t realize but he hasn’t been 100% all year long. Glad he hit that three against Spring Valley. Eli Blackburn is so competitive and wants to win more than anything, he has a little attitude but I can deal with that. He brings a lot to the table and when he was out against Mingo Central it showed. Ray Muncy he is my bench leader and is a great teammate. He is CJ’s biggest fan, Parker’s biggest fan he is always cheering his teammates on. He got sick the other night against Mingo Central, his sugar dropped and he was dehydrated but he was back to normal against Spring Valley.”