GROWING UP IN LOUISA: Exploring a Junk Yard

This is an old memory I wrote about more than ten years ago, but remember quite well. It came back to mind as I was daydreaming about those early growing up years. Life has taught me that kids are bound to get into places known to be off-limits. It was no different in my life. I had adventures with several of my friends and I’ll try to put together those experiences as best I can. Meanwhile, here’s a repeat of that day a long, long time ago.

Did you ever push against a galvanized metal privacy fence to find that if you push hard enough a little gap appears? I mean like when the gap is just almost the right size to let you slide through but threatens to spring back? The issue was that if I got half-way through, I stood in real danger of being cut, perhaps deeply. Maybe the rewards of making it through the gap would be worth the effort but I didn’t know for sure. I found myself in that position once when I was still in grade school.

A friend who was with me, Jimmy Young, told me that there was a mean dog on the other side of that fence, but in spite of all my pushing and the racket that I was causing, no such dog had even barked or come sniffing around to perhaps snap at my exposed hands, or anything within reach. The weeds were so high I could barely see anything beyond them. The lack of paths wasn’t consistent with an animal being back there, either. Once I got through the fence I saw piles of junk that cluttered every inch of this back lot. I think the property belonged to a used furniture or antique store. I had seen enough already to think there were likely some pirates treasure buried there hidden away from snooping eyes. The corrugated fencing, apparently made from the same materials that made up the roofing of the main structure out front, was a strong barrier sure enough.

Jimmy wanted to know what was in there, too, but lacked the leverage to make it happen. While I wasn’t heavy, Jimmy was lanky, too, plus he apparently wasn’t as determined as me, so I tried to press on to get in. If we had not known that the business was closed on that day, it is unlikely that we would have had as much interest because the old man that ran the establishment wasn’t necessarily averse to getting after little boys that overstepped their boundaries. Hadn’t I found that out just walking by his place one time? I mean the language! If I hadn’t already learned that stuff on the grade school playground, I would have been totally confused. 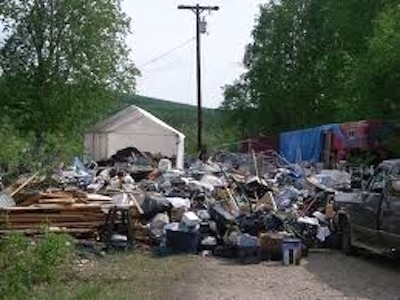 Suddenly, there was a loud pop! The nail that had held the piece I had been working on had loudly broken loose. Now, there was a metallic creak that filled our ears. I had made a larger gap in the fence and success was at hand. The place was now accessible for us youngsters to slip through and explore. Jimmy was right behind me. In fact, when I stopped to get my bearings he collided with me nearly knocking me to the ground. From the looks of it that could have been an occasion for requiring a tetanus shot because the ground was covered with rusty metal shards aimlessly strewn about to catch the bare feet of any kid that may have made it in this far. This was the first booby trap I had actually seen.

It wasn’t so much the scrap metal that caught my eye, but a weathered stand about four feet high with grand carving all about its height. On the very top was a triangle of some sort and numbers were written in Roman numerals all around its circumference. Jimmy said that it was a sundial, but it was sitting rather askew so that it would never have told the time. Besides, beneath the chipped white paint a brownish red color was washing through announcing that rust would soon be the master that would consume this work of art. What a shame, I thought. On a covered porch at the back of the business were lots of chairs of every kind, each stacked on another making it difficult to even figure out where one began and another ended. There were upturned washtubs and barrels full of trash. One metal barrel had been used to burn trash. That was clear because the whole drum was red with rust, as if the exterior paint had cooked off. The inside was covered with cakes of carbonized black powder, the residue to be expected even by a youngster if he had any exposure to such things.

I remember a reel mower (mowers didn’t have motors in those days), and some steel-rimmed wheels that were off of something. There was a small shed in the back corner and I decided to look into what may have been stored in there. Creeping ever so softly, perhaps as much for effect as to sneak up on any prey that may have withdrawn to this abode, Jimmy and I were soon there. It was just as we arrived that Jimmy announced he needed to heed nature’s call. I impatiently waited while he disappeared around the corner of the shed. I was reluctant to continue without him, lest he be mad and accuse me of taking any good thing I might find, so I waited. Besides, we didn’t want to take anything that didn’t belong to us, but merely to see what had been ‘off limits’ to us. Finally, Jimmy appeared and nodded toward the loosely hung door. I pulled the door open and looked inside to see that the roof had already given way and a great pile of stuff was smothered under the fallen roof. It would have been too dangerous to dig in further, but perhaps a look underneath through any voids would tell us something.

Jimmy and I were able to clear the gap in the fence at nearly a full run. In fact, we were at least a half block away when we slowed to catch our breath. I’m not sure which of us was the first to see it, but one of us screamed and turned and ran. The other took a quick glance and ran not far behind the other. We both had seen a spooky pair of eyes looking at us from the darkness under the pile. Neither of us had any idea of what it was, but I now think it maybe was the infamous junk yard dog, perhaps chained up with mercy to protect little kids.

Maybe it was scary because we were where we should not have been, or perhaps the imagination of two young boys would have kicked in anyway. But I never had an urge to go back. To this day I don’t know if the building and its back lot are still there. Maybe I’ll just barely glance that way next time I’m in town. Then again, maybe I won’t.