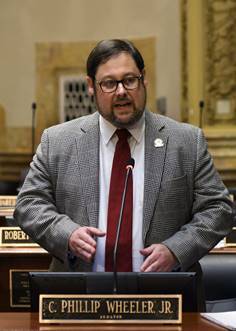 We have officially crossed the half-way point of the 2022 60-day Regular Session. Week 7 of session was action-packed as we introduced consequential legislation and moved it through the Senate.

As many of you may recall from my prior legislative updates, the Senate unanimously passed Senate Joint Resolution 99 on Friday, February 11, demanding that Governor Andy Beshear to do what was right and exempt Kentucky taxpayers from increased motor vehicle taxes which are a result of inflation caused by poor economic policies in Washington. In fact, Governor Beshear’s Administration previously had sent out a memo to the PVAs of the Commonwealth ordering them to raise auto taxes by 40%. For over a month the Governor simply denied he had the authority to do anything else.  Yet after the passage of SJR 99, the Governor rescinded his memo and has now ordered the Revenue Cabinet to freeze vehicle taxes at their 2021 levels.  Thanks to the public pressure placed on the governor by the state Senate, Kentuckians will now be relieved from their inflated vehicle taxes and those who have already paid them will be issued a refund. See your local county clerk for that.

A headline-dominating topic since the onset of the COVID-19 pandemic has been education, primarily deriving from parents’ concerns about the quality of their child’s education and fears that students are being taught what to think rather than how to think. The behavior of special interest groups has been to not only ignore parents’ concerns, but even mock and ridicule them.  This has heightened attention on school curriculums and educational standards. The groundswell from the public has been so strong, even places like San Francisco are recalling school board members. This has also been demonstrated in elections across the nation, most notably the gubernatorial election in Virginia, where voting parents are demanding lawmakers listen to the concerns of parents. The Senate has identified a way to positively adhere to the desires that the Kentucky public demands.

Senate Bill 138 is a positive, landmark piece of legislation to ensure that the American values of equality, freedom, and personal responsibility are taught in our public classrooms and ensure that they remain free of radical propaganda such as Critical Race Theory. SB 138 specifies a list of historical topics that must be taught but does not exclude any particular set of documents. This flexibility allows educators the autonomy to create the whole recipe for teaching American History.

The key tenets of SB 138 emphasize the values of core American democratic principles of equality, freedom and individual rights.  One of the most important aspects of SB 138 is the requirement to instruct students using core primary source historical documents and speeches, including but not limited to the Declaration of Independence, the U.S. Constitution, and the Gettysburg Address. Through the study of original documents, students are able to get a window into the minds of our country’s founders and the ideals that make America the greatest country on the face of the Earth. Students should come away with the understanding that in America – regardless of race, sex, or socioeconomic status – the freedoms we enjoy as part of our Constitution afford all citizens the power to succeed.

While students should be taught that slavery and post-Civil War “Jim Crow” laws and discrimination were contrary to our founders’ original intent for life, liberty and the pursuit of happiness, defining racial disparities solely on that legacy is destructive to our nation’s unity. It’s noteworthy that teaching these principles does not exclude the teaching of controversial aspects of our nation’s history. SB 138 also sets the parameters for teacher training, allowing them to choose whether to engage in diversity-based professional development. It prohibits assignments, projects or extra credit on politics, social-policy or lobbying activities for which a student or their family objects.

The nursing shortage is not a new challenge in the Commonwealth but the COVID-19 pandemic has only exacerbated the problem. SB 10 aims to alleviate the shortage by tackling several issues within the profession, making it easier to accept nurses from other states and expedite licensing while not sacrificing quality of care. SB 10 has been designated priority legislation and will address the ongoing nursing shortage that stresses Kentucky’s healthcare system.

One focus area in SB 10 includes removing arbitrary caps on nursing education programs.  This codifies and extends provisions of the Governor’s executive order last fall. SB 10 would also restructure the Kentucky Board of Nursing to be more reflective of Kentucky’s geographical diversity.  Most importantly, the new Board of Nursing will bolster the voices of practicing nurses by giving them 10 seats on the board.  Additionally, the bill implements legislative oversight of nominations by requiring Senate confirmation of members of the Board of Nursing.

Two significant provisions of SB 10 include reciprocity so more nurses from other states can practice in Kentucky. The Commonwealth currently has a compact with 24 states for reciprocity, but SB 10 opens possibilities for nurses in states beyond that compact. Nurses from non-compact states with a license in good standing can obtain an immediate temporary work permit to go straight to work in Kentucky. The bill would also recognize out-of-state nursing licenses and creates a process for foreign-trained nurses who pass the National Council Licensure Examination test or a Commission on Graduates of Foreign Nursing Schools test to practice in Kentucky.