We are quickly approaching the halfway mark of this year’s 60-day legislative session, and Frankfort enjoyed several days of pleasant weather. However, there was little time to enjoy the sunshine and warmer temperatures as lawmakers continued to work on policy to move the commonwealth forward.

The state legislature is the representative branch of state government. In each chamber in the state capitol is a voice representing you. Perhaps no piece of legislation in the 2022 legislative session exemplifies your voice being heard more than Senate Joint Resolution 99, a measure identified by the state Senate to bring motor vehicle tax relief to Kentucky taxpayers. Unlike a bill, a joint resolution does not modify law but carries the force of law.

Not every bill proposal impacts you at your dinner table or directly in your pocketbook, but a potential 40 percent increase in taxes on your car or truck is something many find directly in their mailbox and can understand is an injustice.

Because the COVID-19 pandemic disrupted the global supply of automobiles, the assessed value on vehicles has been artificially inflated. Since motor vehicle property taxes are connected to the standard value of a car or truck, the tax burden has followed. That burden equates to nearly $70 million. The good news is existing state law provides the executive branch with authority to right this wrong (KRS 132.485). The bad news is Governor Andy Beshear has chosen not to utilize that authority and exempt Kentuckians from this pandemic-driven tax burden.

Given the Governor’s enthusiasm for exercising executive authority — in some cases acting unconstitutionally and being admonished by state and federal courts — it is unclear why he would not exercise a statutory authority actually granted to the executive branch. Since his administration has chosen inaction, Senate Joint Resolution 99 would make the decision for him and require him to order the Department of Revenue to exempt taxpayers from inflated tax burdens. It would also grant immediate refunds to anyone who has already paid their motor vehicle tax this year. 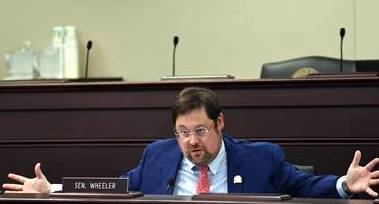 As diligent review of the Governor and state House of Representatives budget proposals continue, please know my priority is not the state’s bottom line but yours. Because of billions of dollars in federal spending making its way into Kentucky, state revenues are at record levels. In the more extensive tax reform discussion, I am committed to finding other ways to keep more money in your pocket. Not a single penny of state funds came from anywhere other than hardworking taxpayers. You do not work for your government; your government works for you.

Here are some additional measures we passed in the state Senate in week six of the session:

Senate Bill 6 gives collegiate athletes the freedom to earn money their name, image and likeness, but also allows colleges and universities to implement reasonable restrictions. The bill will prohibit a collegiate athlete from endorsing illegal products or promoting sports betting.

For decades, the NCAA, universities, broadcast networks, and advertisers have financially benefited from the talents displayed by collegiate athletes. The NCAA brought in over $800 million in 2019. That amount is not surprising when considering the attention sporting events garner. Allowing young people the opportunity to reach their full potential and achieve financial security for themselves and their families is the right thing to do, especially since the NCAA and the federal government have failed to act on this issue. University of Kentucky basketball coach John Calipari joined us to support the bill, calling SB 6 “model legislation” and the next best thing to federal legislation.

Senate Bill 42 serves to cut food waste and aid in Kentucky’s goal of providing nutritious food to those in areas with little access to food options. It allows local public agencies to contract or purchase through noncompetitive negotiation when the contract is for perishable foods such as meat, fish, poultry, egg products, vegetables, and more if the label specifies sale or consumption by a specific date. Contracts over $30,000 would have to be published in the local paper for bids.

Senate Bill 54 sets a minimum age of 18 to be appointed members of the Soil and Water Conservation Commission. This commission assists local conservation districts in carrying out their responsibilities and distributes public taxpayer funds to Kentucky farmers. Additionally, the bill modifies the nomination and appointment procedures of commission members.

Senate Bill 68 establishes efficiencies within taxpayer-funded programs. It requires the Finance and Administration Cabinet to enter into a contract with an independent pharmacy benefit monitoring entity to monitor all pharmacy benefit claims within the state’s Public Employee Health Insurance Program. It also requires the Cabinet for Health and Family Services to do the same for the Medicaid program.

Senate Joint Resolution 72 directs the Kentucky Cabinet for Health and Family Services to apply for a Medicaid waiver from the federal government, providing additional services and support to improve the lives of individuals with severe mental illness. Joint resolutions, unlike bills, do not modify state statutes. They do, however, carry the force of law.

Senate Bill 101 makes it a misdemeanor for first responders—including coroners, EMTs, firefighters, rescue workers and police—to take a photograph or video of a deceased person at the scene of an accident or crime for any purpose other than those related to their official duties. Penalties would be set for no less than $500 and not more than $2,500. The bill also requires forfeiture of the device used to capture the photographs or videos.

Senate Bill 104 establishes the Employment First Council within the Office of Vocational Rehabilitation of the Education and Workforce Cabinet. The EFC will serve as an advisory council to the governor and the General Assembly to promote increasing meaningful opportunities for competitive integrated employment for citizens with disabilities.

Senate Bill 106 requires that every incorporated city operating as a public corporation and a unit of local government file with the Department for Local Government before September 1. Failure to do so timely could lead to dissolution.

Senate Bill 111 gives local governments the ability to save money and put taxpayer funds to use in ways they may identify as more beneficial. It loosens restrictions for local governments to use an independent consultant or financial advisor to determine if a TIF has an economic value optional instead of required. In cases where a city or county elects to use an independent consultant or financial advisor, it requires the consultant or advisor to work with the city or county’s budget office to develop the report and determine the methodology the report is prepared by.

It’s a privilege to be your voice in Frankfort. Please come up anytime to see me and other legislators working for you.

Note: Senator Phillip Wheeler (R-Pikeville) represents Kentucky’s 31st State Senate District, which includes Elliott, Lawrence, Martin, Morgan, and Pike Counties. Senator Wheeler is vice-chair of the Senate Standing Committee on Economic Development, Tourism, and Labor. He also serves as a member of the Senate Standing Committees on Transportation, Natural Resources and Energy, Judiciary, and State and Local Government. Additionally, he is a member of the Capital Planning and Bond Oversight Committee and the County Clerk Office Modernization Task Force. For a high-resolution .jpeg of Senator Wheeler, please visit: https://legislature.ky.gov/Legislators%20Full%20Res%20Images/senate131.jpg

Improve Your Golf Swing With These Expert Tips