This Week at the State Capitol: Week 6 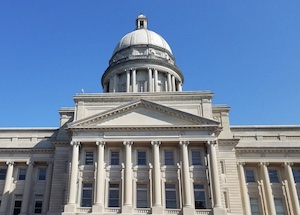 FRANKFORT – The sounds of a legislative session have a flair all their own – the rollcall vote, the crack of the gavel, the chatter on the chamber floor. During the sixth week of the 2022 legislative session, it was the voice of a Louisville fourth grader that brought all ears to attention.

Nine-year-old D’Corey Johnson kicked off the annual Black History Celebration on Tuesday with a rendition of “Lift Every Voice and Sing” that climbed all 212 feet of the Capitol dome. When he belted out the national anthem for the Senate, the normally reserved chamber couldn’t help but hoot in applause.

The performance was a perfect fit for a busy week in the General Assembly, which included a visit from Kentucky Men’s Basketball Coach John Calipari, a spirited debate on unemployment benefits, and action on a host of other measures related education, children, health and taxes.

On Wednesday, the focus turned to Calipari and University of Kentucky Athletics Director Mitch Barnhart, who testified in the Senate Education Committee on behalf of Senate Bill 6.

The bipartisan legislation would provide a framework in state law for college athletes to generate personal income off their name, image and likeness, known as NIL. Calipari and Barnhart told lawmakers that the proposal would create both parameters and opportunities while also protecting the interests of athletes.

SB 6 cleared the full Senate on Thursday and now heads to the House, where lawmakers spent much of Thursday afternoon in deliberations on unemployment.

House Bill 4 seeks to change the duration of unemployment insurance based on the average rate of unemployment across the Commonwealth. The bill would also require participants to engage in at least five verifiable work search activities each week to obtain benefits.

Proponents said the measure is sorely needed to address workforce shortages and attract more jobs to the state. Critics, however, argued that the legislation would disproportionately impact rural areas of Kentucky where unemployment is highest.

The bill passed off the floor after several hours of debate and now heads to the Senate.

Lawmakers maintained a quick pace throughout the week, both in committee and on the House and Senate floors. The General Assembly advanced measures related to:

The Read to Succeed Act — House Bill 226 seeks to invest in improving early literacy education through evidence based learning techniques and intensive interventions that can help struggling students catch up. It won approval in the House on Monday and serves as a companion bill to a measure in the Senate.

Child abuse — Senate Bill 97, which aims to strengthen investigations of suspicious child deaths and serious injuries, received approval in the Senate on Monday. Among many goals, it would require police to request a blood, breath or urine test from the child’s custodian if that person is suspected of being under the influence at the time of the child’s death.

Another measure, House Bill 263, would increase the penalty for first-degree criminal abuse to a Class B felony if the victim is under 12 years old.  It cleared the House Judiciary Committee on Wednesday with unanimous support.

Vehicle taxes — House Bill 6 would require property valuation administrators to tax vehicle owners in 2022 the same as they did 2021. Beginning next year, the bill would also require them to use the average trade-in value rather than the “rough” trade-in value or “clean” trade-in value when assessing taxes. HB 6 cleared the House with a unanimous vote on Wednesday.

First responders — Senate Bill 101 would prohibit first responders from taking photos of people who have died at the scene of an accident or crime unless the photos are for official purposes. Any unauthorized photos could result in a Class A misdemeanor, with fines ranging between $500 to $2,500. The Senate approved the bill Wednesday.

COVID-19 — Senate Joint Resolution 80 would recognize natural immunity against COVID-19 as equivalent to being vaccinated — if the state were to implement vaccine mandates. Individuals who are unvaccinated would need to demonstrate the presence of COVID-19 antibodies through a serology test. The measure cleared the Senate Health and Welfare Committee on Wednesday.

School sports — Senate Bill 83, known as the “Save Women’s Sports Act,” calls for administrative regulations that would prohibit biologically male students from participating in athletic activities designated for girls. It moved out of the Senate Education Committee on Thursday.

The halfway point of the 2022 session is drawing near, and the House and Senate are scheduled to reconvene on Monday for day 28 of the 60-day session.

Kentuckians have many ways to keep in touch with the legislative process. That includes the Legislative Record webpage, which allows users to review and track a bill’s progression through the chambers.

Citizens can also share their views on issues with lawmakers by calling the General Assembly’s toll-free message line at 1-800-372-7181.

SUSPECT IDENTIFIED IN WILD MULTI-POLICE CHASE TUESDAY THROUGH LOUISA, THAT WAS PART OF OVER 100 MILES LONG PURSUIT