To my dear friends,

We have officially crossed the quarter mark of the 60-day 2022 Regular Legislative Session and I have a few high points I’d like to share.

On Tuesday, we received a visit from United States Senator Mitch McConnell who provided an update from Washington and encouraged caucus efforts this session. McConnell spoke to members of both chambers and surveyed the damage that wrecked through western Kentucky. He also affirmed his commitment to Kentucky 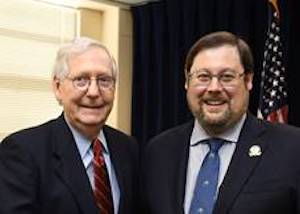 by the $5 Billion infrastructure package coming Kentucky’s way for critical infrastructure needs that will connect Kentucky with neighboring states, increasing traffic and ultimately bringing more commerce to the Commonwealth.   One of the projects that has been prioritized by the General Assembly in connection with the infrastructure bill is the completion of the Mountain Parkway as a limited access highway from I-64 at Winchester to US 23 near Prestonsburg.

Senate Bill 59 is an education and workforce readiness measure creating school accountability conditions that will dramatically increase the percentage of high school graduates with college credit, high-demand workforce credentials and industry-approved internship hours. The bill clarifies college credit must include at least an entire 3-hour dual credit course, approved by the Kentucky Department of Education, or a college-level exam, such as Advanced Placement, that awards at least 3-hour college credits. This bill will provide graduating seniors a step up as they enter college or more opportunities to enter the workforce sooner, if they choose.

Senate Bill 88 establishes the framework for what a special session would look like if initiated by the General Assembly. Currently, only the governor can call a special session, as the Kentucky Constitution outline. In last year’s session, House Bill 4 passed that will place a constitutional amendment on the next general election ballot for you and fellow voters, to determine if you would like the General Assembly to call a special session of its own accord. You’ll recall last year, legislators were unable to respond to your pleas for relief from arbitrary closures negatively impacting your families, businesses, church attendance and overall livelihood.  Kentucky is currently one of only 14 states in the nation that does not allow the legislative branch to call a special session. In the interest of being responsive to constituents’ needs, I encourage your support of the constitutional amendment that will be on the ballot this fall.

The Senate received Senate Bill 100 back from the House on Thursday. This bill is a direct result of the limits put in place by the governor during the pandemic that refused residents in assisted-living facilities, long-term care facilities and mental health hospitals nearing the end of their life a visit from a ‘compassionate caregiver.’ A compassionate caregiver could be a family member, legal guardian, outside caregiver, friend or volunteer, allowed at a resident’s bedside. The bill extends the original provision put in place by lawmakers during the recent Special Session. Prior to action by the Kentucky General Assembly, reports detailed heart-wrenching stories of elderly residents passing away alone, separated from those who made their lives meaningful. SB 100 considers the holistic well-being of those in their last days by giving equal attention to social, emotional and spiritual needs.

Senate Bill 45 aims to bring efficiencies to the Medicaid program by limiting the number of Managed Care Organization contracts accepted by the state. This bill will alleviate some of the burdens our healthcare providers experience with the tedious process and minutia of working with only three Medicaid providers instead of six, ultimately cutting administrative costs, passing the savings on to Kentuckians, especially those in more rural areas.

I have continued to hear from many of you about the financial challenges that you are facing with increased power bills and auto taxes.  Unfortunately, power bills fall under the jurisdiction of the Public Service Commission (PSC) and cannot be directly impacted by the Legislature.  You can get information and voice your concerns to the PSC by calling (502) 564-3940 or by visiting their website at psc.KY.gov.  We are working on legislative fix to Governor Beshear’s Finance Cabinet’s decision to increase the taxes on used vehicles by 40%.  This should be accomplished in the near future and will provide needed relief to vulnerable Kentuckians who cannot afford the luxury of driving new vehicles.

As always, I am here in our Commonwealth’s capitol fighting for your best interest. It’s an honor to serve as your Senator and voice in Frankfort. Please, if you have any questions or concerns, please reach out.

Note: Senator Phillip Wheeler (R-Pikeville) represents Kentucky’s 31st State Senate District, which includes Elliott, Lawrence, Johnson, Martin, and Pike Counties. Senator Wheeler is vice-chair of the Senate Standing Committee on Economic Development, Tourism, and Labor. He also serves as a member of the Senate Standing Committees on Transportation, Natural Resources and Energy, Judiciary, and State and Local Government. Additionally, he is a member of the Capital Planning and Bond Oversight Committee and the County Clerk Office Modernization Task Force. For a high-resolution .jpeg of Senator Wheeler, please visit:https://legislature.ky.gov/Legislators%20Full%20Res%20Images/senate131.jpg