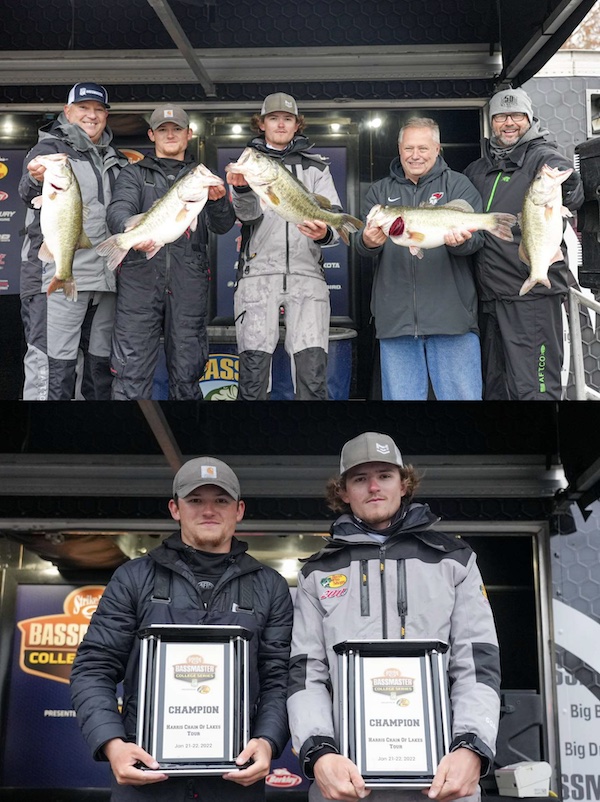 The Messers caught 25-6 on Day 1 and then electrified the final weigh-in with a massive limit of 36-7. They edged Day 1 leaders Seth Jenkins and T.J. McKenzie of Emmanuel College by a 1-2 margin.

The Kentucky Christian team earned $3,070 and a berth in the Bassmaster College Series National Championship (dates and location TBA).

“We went into today not knowing how doable it was to catch another big bag, but we wanted to make them beat us,” Lafe Messer said. “By about midday, we started thinking this will be a tough bag to beat. On stage, that winning moment — I can’t even describe the emotions.”

The winners split their time between Texas-rigged Magnum Trick Worms and Carolina-rigged creature baits on Day 1. By day’s end, they were sold on the latter and Day 2 saw them catch all of their weight on the C-rig.

“I think the most important thing was just how slow we were fishing it,” Matt Messer said. “I was fishing it as slow as I could stand to. It was probably a minute and a half a cast.”

The Messers also broke the Series’ two-day catch record. Cole Sands and Conner Dimauro of Bryan College set the previous record of 55-12 after the first two rounds of the 2020 Bassmaster College Series Championship on the Harris Chain (three-day event).

“I told (Lafe) all week, ‘If it was God’s plan we were going to win,’” Matt Messer said. “It ended up working out right.”

Location, location, location: Both days, the Messers stayed in Lake Dora and fished shellbeds in about 10 feet and focused their efforts on a couple of sweet spots. The two main shellbars they fished presented classic prespawn staging areas outside of spawning canals.

State of the tournament: Matt Messer described a blistering start to a day that was done by lunchtime. “Out of the first four fish I set the hook on today, three of them were 8-pounders. We had over 30 at about noon.”

Key change: The Messers had a big school fired up on Day 1, but those fish didn’t want to participate a second day. Making a 200-yard move on the second morning yielded huge results.

“Yesterday, we were done fishing by 10 o’clock, but today we started there and didn’t get a bite,” Lafe Messer said. “We switched to our other school and they were biting. I don’t know if the cold messed up one school and the other one stuck around — I don’t really know what happened there.”

Trouble averted: Matt Messer described a hotel parking lot mistake after Day 1, which left their boat unplugged all night. Scrambling to overcome the potential disaster of starting the day with a severe power shortage, they were able to find an option at the last moment.

“This morning, we put in, pulled as close as we could to a power outlet, and charged the boat while we were waiting for takeoff,” Matt Messer said.

Quote of the day: “We thought we had something good coming in, but we never thought it was that good. I think it was God’s plan for us to catch them, and that’s what happened.”

Catch of the tournament: Joseph Woods and Anthony Cicero of Bethel University won the big bass award for their 10-14 largemouth. Their fish had been tagged by the Florida Fish and Wildlife Conservation Commission.

The tournament was hosted by Lake County, the City of Leesburg and Greater Orlando Sports Commission.

NO SCHOOL FOR STUDENTS MONDAY; PROFESSIONAL DEVELOPMENT DAY FOR STAFF