This story is more than a week late

FORMER MAYORS AND OTHERS SHOW UP FOR THE TRIBUTES AND REWARDS FOR THE 40 YEARS (TURNS OUT IT WAS ACTUALLY 41 YEARS) OF SERVICE, ADAMS JOKED MULTIPLE TIMES WITH SLIGHT CONCERNS THAT HE HAD ‘DIED’ AND WAS BEING SHOWN HIS EULOGIES!! 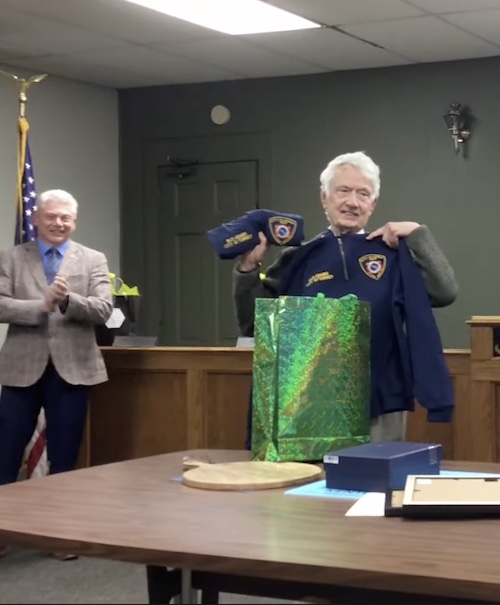 After Louisa city Mayor Harold Slone opened the city council meeting with the pledge of allegiance and also a prayer that was given by council member Tom Parsons, mayor Slone unfurled an unexpected surprise at the beginning of the meeting, albeit most of the people who were inside City Hall for the meeting knew what was about to take place, with the rest of us there not knowing what was coming up especially the main person who was about to be imminently the main center of the attention, totally clueless until he saw a couple of his former assistants come into the start of the meeting, catching his attention that something was adrift, when Mayor Slone then announced to everyone that a tribute celebration was at hand for the longest current city employee attending: Louisa Attorney Eldred “Bud” Adams.

Adams was recognized by current and former city officials during the Louisa City Council regular meeting on Tuesday, January 11, which was planned without his knowledge after Mayor Harold Slone recently went through minutes of past Louisa council meetings, including those for the January 13, 1981, session in which Eldred Adams was sworn-in to the non-elective office.

Calling the minutes of the 1981 meeting “interesting reading,” Mayor Harold Slone read parts of the record at last week’s Tuesday session and noted how much prices have changed over the last 41 years.

During the January 13, 1981 meeting, in addition to Mr. Adams becoming city attorney, council members approved a $23,508 bid for a new garbage truck.

“We just purchased one for a hundred and fifty-fix thousand and eighty dollars,” Mayor Slone said.

Mayor Slone then proceeded with “a little celebration” of Mr. Adams’ anniversary (Mayor Slone stated he thought Mr. Adams had been city attorney 40 years this year, but it turned out he it be his 41st year); Mr. Adams was honored for his career with that included gifts from and remembrances by several current officials, including Louisa Police Chief Greg Fugitt and Louisa Fire Chief Eddie Preston, and three former mayors (a fourth former mayor, Bill Jackson, was also invited but did not attend).

Another honor was a proclamation by Mayor Slone and the former mayors declaring last Thursday, January 13, as “Bud Adams Day” in the city. Mayor Slone also presented Mr. Adams with the first Gem of the Big Sandy award, which the mayor said he planned to give to “people of Louisa for when they do things that need to be recognized.”

“We can sign an executive order and declare them a Gem of the Big Sandy,” Mayor Slone said. “So, Bud Adams is going to be the first.”

Lawrence County Clerk Chris Jobe was on hand to present a certificate from his office and read a letter from Kentucky Secretary of State Mike Adams, making Bud Adams an official Commonwealth Ambassador. The award is the “highest honor this office can bestow” and is given to individuals who “demonstrate exceptional character and citizenship through the contributions of the communities of our commonwealth,” the secretary of state’s letter said.

Throughout the presentations, Mr. Adams repeatedly joked that it felt like he was “coming to my funeral and this is the eulogy.”

Former Mayors Mike Sullivan, Mike Armstrong and Teddy Preston also attended the meeting and spoke briefly about their experiences with the city attorney.

“Unfortunately, I was the mayor when we received a package of information one day from the Sierra Club, which, at first, I thought was a complete joke, because I had never heard of the American Canoe Association,” Mike Sullivan said.

Former mayor Sullivan, who came all the way from Lexington for the honor event, was referring to a federal lawsuit filed by the Sierra Club and the American Canoe Association against the city and the city’s water and sewer commission alleging violations of the federal Clean Water Act. The lawsuit claimed the city failed to comply with the terms of a permit that authorized the discharge of a specified level of effluents into the Levisa Fork of the Big Sandy River.

Mr. Sullivan said he took the packet of information to Bud Adams, even though his “gut instinct” was to “write ‘nuts’ on it and send it back,” but Mr. Adams talked him out of it.

Mike Sullivan thanked Bud Adams for “all the time I rushed into his office unannounced and kind of interrupted him, and he was always receptive to that.”

“The Sierra Club got you pretty close, though,” Mayor Slone said jokingly.

Former mayor Mike Armstrong, who served as mayor prior to Sullivan, and also came from far away for the celebratory event, also said Bud Adams was very accessible as city attorney.

Like Michael Sullivan, former mayor Teddy Preston mentioned the Sierra Club litigation, by saying Bud Adams “worked night and day to get us out of that thing.”

“I appreciate Bud very much for what he did for us all,” Teddy Preston said. “Bud, you’re a good man and a good city attorney, the best I ever saw in my life.”

The celebration for Bud Adams, followed by Mayor Slone showing again the check the city was awarded last month by the state at an honoring event in Ashland, KY., made up for half of the city council meeting; running for just over 25 minutes of the 50 minutes total the city council meeting lasted, as only ten minutes was needed to carryover on the agenda listed for the meeting.

(Four of the six Louisa city council members were present for the meeting with councilman Gary Robinson not attending due to illness and councilwoman Lisa Schaefer unable to attend the meeting due to needed commitment to her job).

Later in the meeting mayor Slone asked if there were any comments from the audience or from city Council members which led to a brief statement by council member Tom Parsons who wants again gave statement honoring long the career of Bud Adams service to city.

Mayor Slone then announced that the council would be going into a closed-door executive session, in which mayor Slone said would only last about five minutes but ended up lasting about 15 minutes with everybody else waiting in city hall grabbing up homemade cookies provided by Louisa city clerk Kathy Compton that she made herself for Bud Adams (and the rest of us) to snack on.

After the council returned to regular session, Bud Adams stated that they had discussed a potential future real estate matter, but no action was taken during the closed-door meeting. With that statement Mayor Slone gave a final notice of if anyone had to say anything before the meeting ended, with no one saying anything, mayor Sloan adjourned the council meeting.