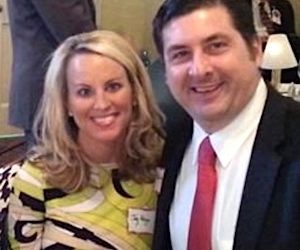 A U.S. federal judge earlier this month granted a continuance in the trial of Lawrence County Attorney Michael Hogan and his wife, Joy Hogan.

U.S. District Judge Gregory F. Van Tatenhove in Frankfort, Kentucky granted the motion on January 4 and rescheduled the start of their trial for Monday, April 4.

Joy Hogan filed a motion in December asking for a continuance in the trial, which was scheduled to begin on Tuesday, January 18, saying her new attorney needed time to review the case.

“The Court finds that the ends of justice served by the granting of such continuance outweigh the best interests of the public and the Defendant in a speedy trial,” Judge Van Tatenhove said in his order.

The Hogans are both charged in a federal indictment with wire fraud involving delinquent tax and child support payments.

Joy Hogan’s new attorney, Michael B. Fox of Olive Hill, said in his December 2021 motion that he was recently retained as her counsel and filed an entry of appearance on December 14, necessitated by Ms. Hogan’s original attorney Mark Wohlander’s withdrawal as her attorney due to medical issues.