DAWGS KNOCK OUT HIGHLY TOUTED CHRISTIAN ACADEMY-LOUISVILLE; WILL SQUARE OFF WITH KNOX CENTRAL SATURDAY AFTERNOON IN THE SEMIS

Owensboro, Ky. — Lawrence Co. ( 15-2 ) is moving to the semifinals of the 2A state tournament after a 75-54 dismantling of Christian Academy-Louisville ( 13-4 ) on Thursday night at the Owensboro Sportscenter. 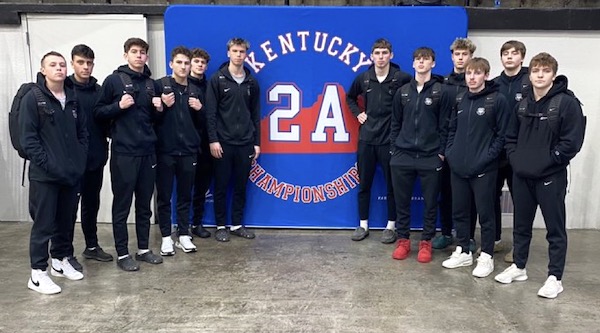 Trenton Adkins scored a game high 23 points, pulled down a game high 16 rebounds and dished out 6 assists, Tyler Johnson went 5 of 7 from three and finished with 17 points and 4 assists, Cody Maynard tallied 16 points and 5 rebounds, Will Lafferty added 11 points, Kaden Gillispie chipped in with 5 points and 5 assists, Ryder Brown had 2 points and Andrew Bloomfield had 1 point.

Trenton Adkins with the exclamation point off of a nice pass from Kaden Gillispie. 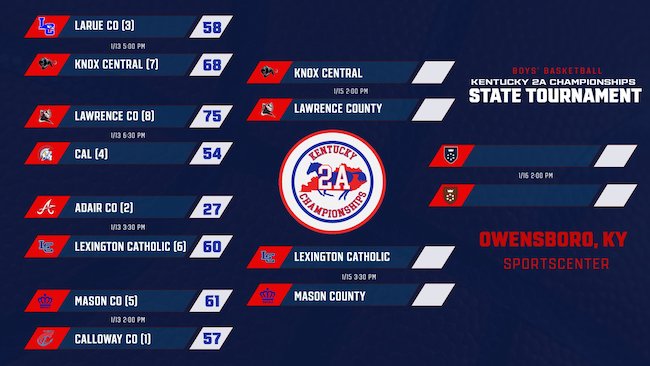 “… Super proud of our guys for coming to Owensboro and knocking off a 13-3 CAL team. George Washington is a really nice player. According to ESPN he is the #24 ranked player in his class and the highest ranked Ohio State recruit in the last 8 years. It was great for our guys to play a team with talent like that. We were able to get off to a hot start shooting 80% from the floor in the first quarter. Our guys really stepped it up on the defensive end holding Washington under his average and holding his younger brother to two points.”

“… We are certainly blessed to coach this group and look forward to playing a really good Knox Central team tomorrow. They have a lot of size and rebounds will be a huge factor in this game but there is no other group I trust more to step up to another challenge than this group.”

Here is Coach Thompson’s comments after the game on Twitter