MARTIN COUNTY DEPUTY JUDGE-EXECUTIVE SWORN IN AS NEW INTERIM COUNTY JUDGE: FILES TO RUN FOR THE FULL TERM IN NEXT ELECTION 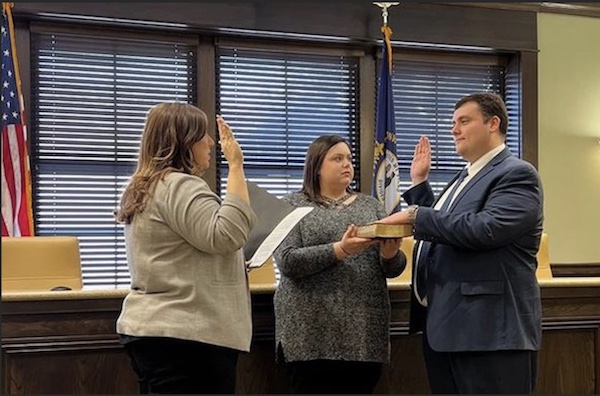 Victor Slone had been Martin County Judge-Executive for only nine months, after being appointed  by Governor Beshear in April 2021, after the unexpected resignation by then judge-executive William Davis from the position in February 2021.

Slone, who was in the middle of his fifth term as a Martin County magistrate on the Martin County fiscal board, had already privately decided to run for the county judge-executive office in early  2021 even before he was elevated by the governor to fill the remainder of the term; which led to Victor Slone to announce in September his intention run for the full four year term for the 2022 elections.

But all of those plans were unfortunately, for naught, as Victor announced in early December 2021 that he had been battling cancer for several years, and that his health and medical condition began declining earlier in fall season, which led him to drop out of the 2022 race for the Martin County judge-executive office.

Then judge Slone stated emphatically that he would finish the remaining year of his term, but tragically, that would not be the plan, as shortly thereafter the health of Victor Slone unexpectedly deteriorated quickly, and Victor passed away at 57 on January 2, 2022.

The newly appointed Judge executive Colby Kirk made a declaration of his vision for the future of Martin County should be, and could be under his leadership.
“I want to see our community grow and prosper as much as anyone,” said Colby Kirk in a message posted on his official Facebook account.Judge Colby Kirk remarked further that he looks forward to serving and promised to work towards economic growth in the community.

Judge Kirk also announced last December, after Victor Slone had stepped out of the judge-executive race; that he would be running for the position in the next election once his time as interim Judge Executive is over.Here below are the two official personal statements from Colby Kirk, the first one is remarks on being sworn in as the new interim Martin County Judge-Executive; & the second statement is his announcement that he will be running for the next full term for the county judge-executive office in the 2022 elections: 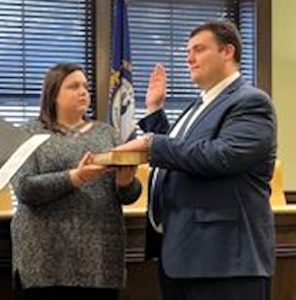 “Today I am honored to have been appointed by Governor Beshear to the office of Martin County Judge/Executive. Having worked as Deputy Judge under Victor Slone, I am ready to carry on the work he started. I promise to work hard for the people of Martin County. I want to see our community grow and prosper as much as anyone. As County Judge/Executive I promise to prioritize public safety, develop adventure tourism opportunities, and make investments with our tax dollars that encourage economic growth and new jobs. I’m looking forward to serving the community which I so dearly love”. 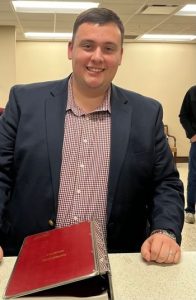 “I am excited to announce that earlier today I signed to run for the Martin County Judge/Executive’s office. It has been an honor to work with Judge Slone as his Deputy Judge and I look forward to continuing the work we’ve started if given the opportunity to move into the Judge’s seat. I am confident I can work with the Fiscal Court and the other elected leaders of Martin County to improve our community. My priorities as your Judge/Executive will be increasing public safety, focusing on meaningful economic development, growing tourism opportunities, and improving the county’s financial standing. There is a tremendous amount of work ahead of us, but I am confident that my experience working in local government will serve this position well. I appreciate your support and hope to earn your vote as this election season begins.”