GROWING UP IN LOUISA: Snow!

My TV tells me that the east coast is again under a winter storm watch. Just days ago we ‘weathered’ (pun) deep snows and traffic pile ups. Kentucky got their share, for sure, as did the northeastern states.  Blizzard conditions are possible and even expected in parts of our region, but usually not multiple events right in sequence. Sadly, this followed two or more storm systems that sent killer tornadoes in my home state. Now, based upon weather maps we will have more of the white stuff tomorrow or sooner. I guess we’ll just rack this one up as a ‘normal’ event when compared to the history of Januarys past.

I remember many snow storms during my high school years there on the banks of the Big Sandy. One, in particular, was so heavy it left the little town looking very much like a Currier and Ives print. The branches of evergreens were loaded and weighed down with a fluffy layer of white. This storm had sneaked up on me that night. I was with my girlfriend in the northern end of Lock Avenue when conditions worsened. I enjoyed the distraction of my visit with this sweet young lady, but found that when it was time to go home, the walk was to take place in a nearly pristine and deep blanket of white, fluffy snow. On my walk home I don’t remember seeing any traffic on the streets, nor even another living soul. I was alone, but somehow warm in a winter’s coat and altogether happy. Snow had coated the telephone cables, street lights, the bare branches of the wintering trees, and had created drifts covering bushes, porches, and sidewalks. It would have been easy to read the footprints left showing where I had been that night. It was quiet and lovely, but it took a while longer getting home since many of my steps sank deeper when I stepped from sidewalk to street. I tried to avoid ditches, although in town, only the drains along the gutters were likely to cause serious problems if encountered. 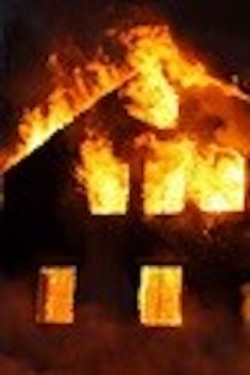 I remember another storm that took me out of my home when the town’s fire whistle sounded. I was a volunteer fireman, so I grabbed my gear and ran and met the truck on Madison Street as it was driving toward the train depot. I clambered aboard not knowing where we were going. The other firemen were tightly holding themselves down on the fire hose. One of them, perhaps Stanley Brown, told me what he had heard. Our trip was along the tracks where a house was fully engaged in flame not far from the newly opened laundromat, but across the tracks. We sprayed the house with water that immediately froze, making beautiful designs of ice, much like frozen waterfalls. Even our ‘turn-out’ gear, jackets and helmets, were coated with ice. At some point, we had to break down the firehose that had been laid across the tracks, because a train was coming through from the south. The break in the action ensured that there was little hope to save the house. We watered down neighboring homes in hopes the fire wouldn’t spread.

It was spitting snow on another night when we answered a call coming from Blaine. It was cold and a long way to traveled on the bed of the firetruck. When we got there we saw that the high school was engulfed in flames. It was to be a long night as we worked hard in our attempts to save the building. I was crawling on the floor of the building beneath the smoke ceiling. I was   trying to hose down the classrooms. Inside, through an open door, I could see that the floor had given way so we were able to spray water directly into the basement where the fire seemed particularly bad. Even though I stayed low beneath the level of smoke, I was finally overcome. My fellow firefighters carried me out and laid me on a nearby little hill. After a short time I recovered and headed back into the fray. At one point, Fire Chief Compton called us out of the building. I looked up and saw that the fire had broken through the roof. I remember that a friend had climbed a ladder and was up on the roof. Chief Compton frantically called him down. He had just gotten to the ground when the roof imploded.

Blaine didn’t have a water system with fire hydrants, so we had to drive the firetruck to the edge of the creek bank, maybe two or three hundred yards away, to reload the water-tank. The bank was too high to use a pump, so we had to use the old-fashioned ‘bucket-brigade’ to refill the firetruck’s tank. The creek was the only water source we had. History will tell you that it wasn’t enough. Even though firetrucks and men from Paintsville, Prestonsburg, and Grayson where there in support of our efforts, the building was a total loss. The heat from the fire melted the snow for quite some ways, so while the fields were white, there was no snow sticking around the burning building. I remember as I huddled down on the hose-bed in our ride back to town that it snowed the whole way, but many of us were too tired and cold to care. I was wet and cold to the skin, black with soot, and ‘dog-tired.’ Chief Compton bought us some coffee, I think at the ‘Hamburger Inn,’ when we got back. It was the first cup of coffee I ever really enjoyed.

Back in the day when snow storms commonly blanketed the area, the school system would not run the buses out on the rural roads. Still, the town-kids would walk to school just as we did normally. Once there, we’d gather around the stove and try to dry our wet socks. We didn’t study or engage in lessons, but just visited and swapped stories. We would break outside from time to time for a snowball fight, but never for any major battles. We’d usually leave school early and tramp home, each in his/her different directions. For some of us it was time to break out the sleds and head for town hill.

I also must mention that a strange thing seemed to happen in certain yards around town. Snowmen magically appeared as if to announce they were somehow in charge. Many were draped with scarves, hats, and had coal or rocks for faces. A week or ten days later their remnants were the last reminder of the snow.  Little mounds of dirty, often nearly black, was all that remained. In thinking aback, the dirt was likely cinders from the many passing coal trains that broke the silence in our little valley. I suppose the soot was less when diesel fuel replaced the steam engines, but even day two after a storm, the sludge on the streets was dirty, already.

One winter’s day I was visiting my mother in Michigan when an ‘Alberta Clipper’ visited overnight. It was the first snow of the season for them, but it was a doozy. I’m sure it was something like two feet deep when I was sent out to shovel the front sidewalk. Once I cut a path through the frozen snow, high mountains were piled making a steep cliff on both sides. My mom and my half-sister were watching me work from the comfort of the living room, noses pressed hard against the crystalized glass. As it would happen, my foot hit an icy place and both feet went up in the air. I ended up sitting in the snowbank with only my feet, the snow shovel, and my arms sticking out. After the ladies enjoyed the sport of laughing at me they finally came out to pull me free. A good bit of the icy material had worked its way under my jacket and into my trousers.

I have to admit that predictions by weathermen have much improved over the last several decades. It isn’t as much a strange phenomenon when we find that the WEATHERMAN WAS RIGHT! The east coast got some serious snow! The cold temperatures suggests it will hang around for a time. Up and down the eastern seaboard many roads are impassible and many, though not all of us, are out of power. Maybe we should slow down and build ourselves a snowman. Stay warm, my friends!  mcoburncppo@aol.com