Beshear declares state of emergency due to heavy snowfall across Kentucky

State offices ordered closed for Friday because of storm. 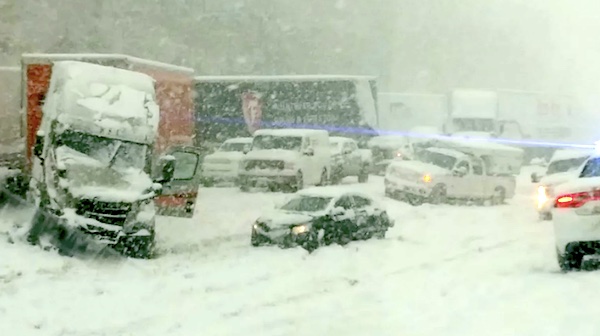 FRANKFORT, Ky. (Jan. 6, 2022) – Gov. Andy Beshear has declared a state of emergency following heavy snowfall that started earlier today and is continuing this afternoon and evening across the commonwealth.

The powerful severe weather is affecting travel on major interstates, and state and local roadways as well as causing power outages and damage to public infrastructure and private properties.

District 12 acting spokesperson/chief engineer Mary Holbrook said tonight that the roads are very slick and that all motorists need to use extreme caution and preferably stay off the roads.

“Our guys are out there plowing as fast as they can right now but the traffic is slowing us down considerably,” Holbrook told The Lazer. ” Also, we are having problems with people on side by sides with plows following along behind our salt trucks scraping the roads trying to help clear them up — but it is actually causing a lot of problems because they are throwing the salt off the highways so it is not melting correctly.” 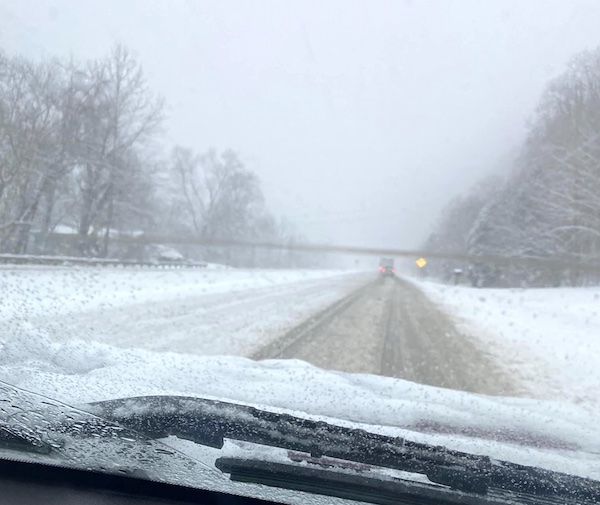 Photo by Amanda Spears
By Valero at 4:30pm

Currently, the Kentucky Transportation Cabinet and the Kentucky State Police are working all interstates. The Kentucky National Guard is activated at all interstate closures and standing by on others without closures. Search and rescue teams are activated for safety checks on stranded motorists. And the Red Cross is monitoring the need for warming centers.

The Governor asked Kentuckians to visit GOKy.Ky.gov to track hazardous road conditions across the commonwealth.

“We are urging Kentuckians to stay off the roads if possible,” Gov. Beshear said. “The weather we are continuing to see across Kentucky is dangerous.”

Today, at 12:30 p.m. EST, Gov. Beshear provided an update to Kentuckians and said that due to inclement weather he had closed all state office buildings as of noon EST. Executive branch agencies will continue to provide services to the citizens of the commonwealth.

Snow is expected to become moderate to heavy this afternoon. A Winter Weather Advisory has been issued in portions of Central Kentucky north of the Western Kentucky and Bluegrass Parkways, where 1 to 4 inches of snow can be expected. The highest amounts of snowfall, 4 to 8 inches, are expected to fall across Southcentral and Eastern Kentucky, roughly from Bowling Green to Richmond.

The Governor urged Kentuckians to avoid travel due to hazardous road conditions and reports of multiple accidents. District crews from the Kentucky Transportation Cabinet have been pretreating roads this week, with crews out today responding to hazardous roadways. The cabinet asked for cooperation and partnership of the public, with four specific requests:

BULLDOGS DOWN BELFRY IN THE CLASS 2A GIRLS TOURNAMENT; WILL PLAY FLOYD CENTRAL IN THE SEMIFINALS TONIGHT WEATHER PERMITTING